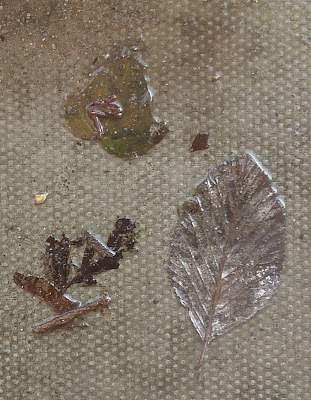 Leaves in on wet concrete as they fall  and arrange themselves; and begin to disintegrate.

In The Grove Tavern, there is a Jack Russell. Beside him is his rubber ball worn on the surface and punctuated by tooth marks. I ask the owner, if it is the same Jack Russell which I have seen bounding after a ball in the Grove and catching it, following  a long, energetic throw, on the first or second bounce. "The same," he says, "but we have moved to London now." Of all dogs I have the softest spot for Jack Russells, despite their restless intelligence, or rather because of it. "All they need is attention," he says. "They need to be kept occupied and interested". This one is four years old and  clearly as well behaved as he is quick off the mark. I recall an unruly, one year old Jack Russell  which  came to our house some years ago,  misbehaved dreadfully, and among other misdemeanours, ate my sheepskin slippers. I blamed its owner  then and still do.  It was apparent that neither her intellect and attentiveness was a match for her dog's.

The local weather forecast on the BBC website says "light rain". It has rained relentlessly all afternoon. There are puddles on  the path. I think of the spring  that rose in our basement last month. Since my son-in-law sent some absorbent sheets to obstruct the next flood, none has occurred. Whatever its ultimate purpose the material has demonstrated additional,  magical properties by introducing  a period of relatively dry weather.
Posted by Unknown at 4:50 pm

I love the image, it looks very sculptural and would also make a lovely print, I think. We had a dreadfully heavy rain yesterday, thankfully no leaks that we've come across, especially from the roof which we had replaced a few years ago.