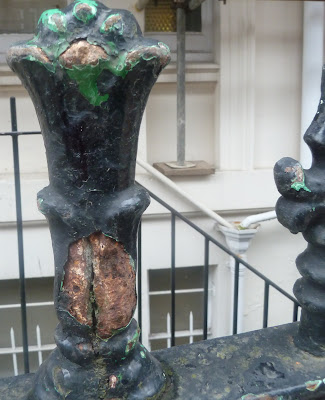 Rust and peeling layers of paint add interest to a finial on these neglected railings.

My late brother Michael's occupation required him to make a lot of speeches, many of the after-dinner variety. He was widely read and appreciated the gleanings of others of the same inclination. None more than  those of Geoffrey Madan,  described by a contemporary as " a true scholar without any of the affectations of scholarship". He died in 1947. Madan's notebooks with their many quotations testify to his wit, perspicacity and consummate prose style. I can understand why Michael found them a constant source of inspiration.  So much so that when he was waiting for a replacement prosthetic leg - he had lost a leg to diabetes - he postponed an order for the new leg in order to buy, for a considerable sum, one of the six original typescripts of the notebooks compiled by Madan's wife after his death.  As far as I know, despite a year's prolonged discomfort, he did not for a moment regret his decision. Today I spot in Hall 's bookshop  on the 50p shelf a paperback selection from the notebooks of which I already have a copy.  I greedily fork out for it just in case I can find someone who would like it. The recipient will discover for himself the name of the magistrate who said: "People are entitled to shout when they are drunk. That is not being disorderly.Or the name of the American girl who said of the Ten Commandments: "They don't tell you what you ought to do: and they only put ideas in your head."

In The Grove this afternoon, the heads of  a crowd of pigeons bob up and down on the grass as they peck for food.
Posted by Unknown at 4:50 pm

The ending of your second para made me smile :)
Best.