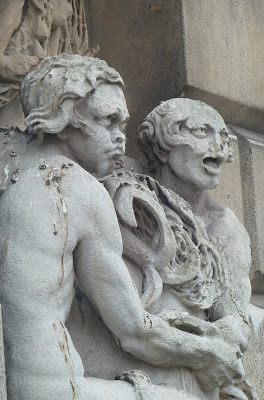 These people are to be found on the fascia of Somerset House in London. I am not sure who they are or what they are up to, but one hopes, since they are permanently adjacent, that they are friends.

The garden next to the vegetable garden, where I have been spending a lot of  time in the last couple of weeks, is now deserted. Last year when the house was still occupied by a very old man it was merely neglected, kept just respectable. I rather like it as it is. The white flowers of bindweed clamber over shrubs that used to be cared for, and long grass rises from the paths once regularly mown. Dandelions flourish. Birds have their way there. I watch a young female thrush, making a meal of a cherry which has fallen into a bed of rampant leaves.The cherry must have been dropped by another bird, because the fruit have long her been stripped from the tree, long before it had ripened.. The thrush allows me to photograph her as she nibbles the cherry, dropping  and retrieving it from time to time, although I am no more  than four or five feet away.

Someone at The Compasses shows us a a Common blue butterfly which has settled on his hand. He allows me to photograph it. He draws attention to its dark colouration. It is almost purple. But he is certain that it is a Common blue. Not so common nowadays though. No butterflies are, at least round here.

The Somerset House chap on the left appeared with you on a collage after the time I came to visit - I took the photo while hovering before going into the Bloggers' Retreat.

Lucy Thanks for reminding me. I thought he was familiar. Meanwhile I have another couple in my next post.