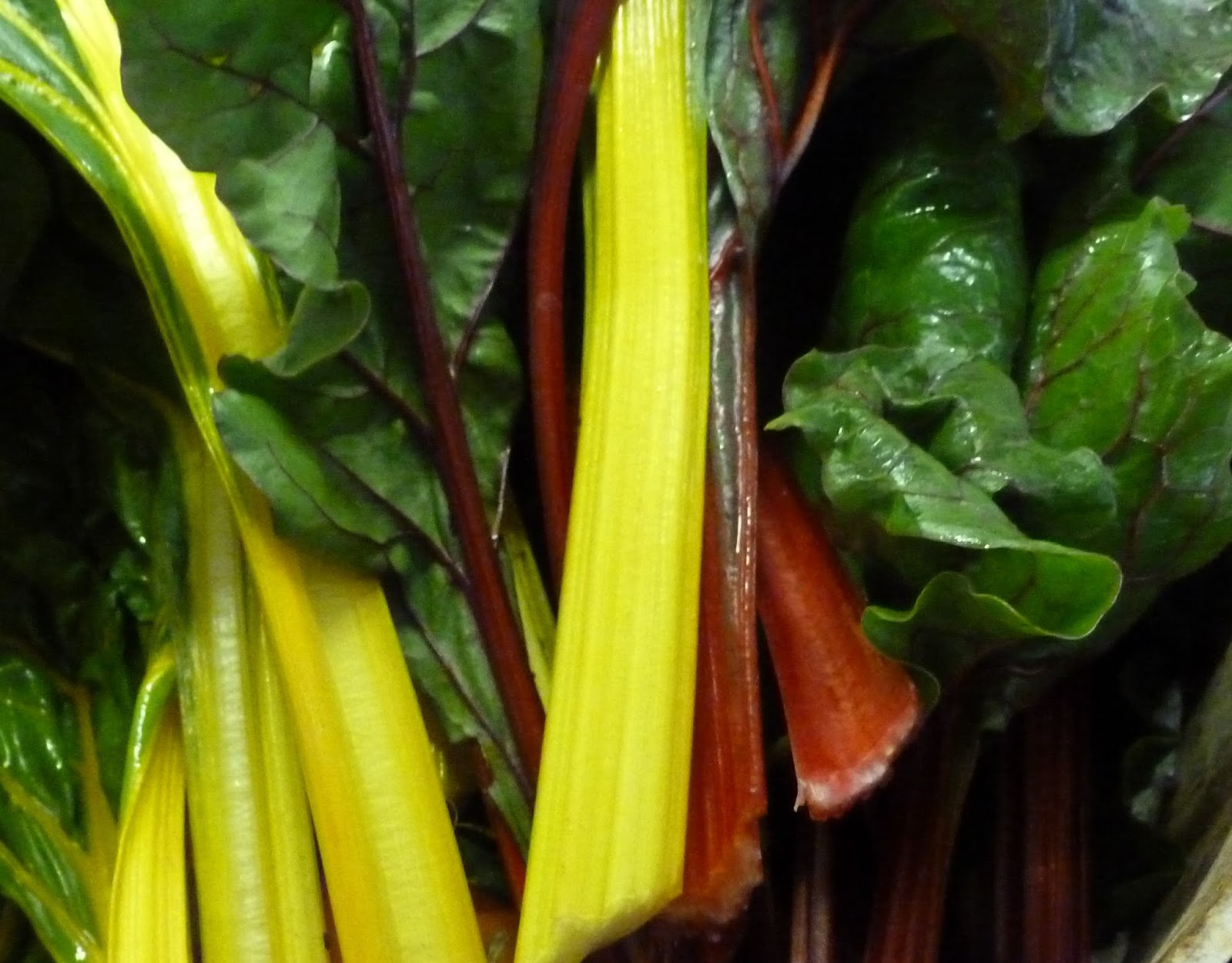 Chard is flourishing at the moment.  Here is some freshly  cut  ready for supper. Stalks, red yellow and cream. Leaves, deep green, veined and immense.

"Sad" is a word used by the young in a new and rather nasty way to suggest something unsavoury rather than a state of sorrow. In the supermarket a young shelf-stacker says to another: "it would be really sad if you knew where everything was in the whole store..." Snicker, snicker, "...even the nutritional information." The other other cultural feature  here is to look down on knowledge and achievement. An English attitude well illustrated by  the expression invariably used in contempt: "too clever by half". No body want to be seen to be clever. And many take that as an excuse to try not to be clever. And too often succeed.  If you happen to be clever, keep it under your hat, boy!  Me, I'm not clever.  Really. But I am clever enough to like and enjoy the company of clever people in preference to those who espouse semi-conscious idleness bereft of intelligence and curiosity.

High on the list of objects that make me laugh are rubber gloves, particularly when they flop around untenanted. Through a window I see a pair hanging over a the tap above a sink, plastic, yellow sausages pretending to be fingers.  I feel like laughing. I think I will.
Posted by Unknown at 4:58 pm

Cleverness. It could sometimes compensate for other failings in an acquaintance. I stuck with one very clever friend (not one of my more pronounced tendencies) right up to the point where I experienced the absolute awfulness of his behaviour. Finally dropped him with a sigh, knowing that a direct replacement would be virtually impossible.

My blog went temporarily Google-gaga leaving me unable to post. As Basil Fawlty said: I mean it's so basic. I have resolved that problem and now I am checking whether I can comment on other blogs.

Love the rant. I suppose I might be guilty of using sad in something of that sense, as in 'I'm drinking alcohol-free beer for the moment so that I'm OK to drive down to the pizza place. Which is a fairly sad state of affairs.'

Not that going to the pizza place has anything wrong with it; their pizzas are thin and crisp and made with a light hand and very good, and they are charming people who, if we are eating in, always give us seconds of red pepper dip and breadsticks. But drinking alcohol-free beer is rather dismal, only I don't like to feel left-out but do want to be safe to drive, and require a pussyfoot. A dash of lime cordial helps.

Being sad in the sense of knowing too much is supposed to be rather akin to wearing/being an anorak, I suppose. I am happy to be sad in such an instance, and have more than one outer garment that might resemble an anorak.

Rubber gloves make me laugh too.

Robbie It would be sad if all clever people were awaful. I hope they are not.

I hope that Blogger is now with you again.

Lucy You are right. Sad does have an extended meaning. I certainly use it often in that way. I suppose what struck me about the instance in question was its use in derogatory way to make something that might be estimable seem rather pathetic. Not strictly a misuse of the word rather a sad tendency to sneer. A spontanious protest on my part which I now regret. Rather sad really.