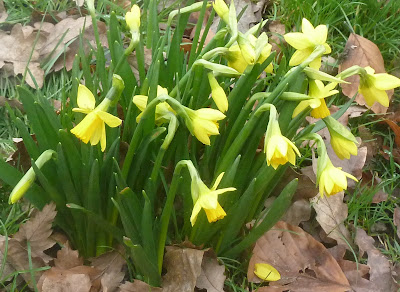 At last. Open for business.

There is a closely clipped leylandii hedge in Mount Sion, which incorporates some forsythia, normally a shrub which gardeners find untidy after its has flowered and is only tolerated because of its early explosions of yellow in advance of Spring.
" ... and pinkly bursts the spray
Of prunus and forsythia across the public way."
But set as it is here, its flowers level with  the evergreen fronds, look like stars shining from a green night. Never has leylandii, that most hated of suburban trees, or forsythia, appeared in a better light.the hedge

From the butcher, the most economical and at the same time one of the finest-tasting, cuts of ham - the knuckle. Lots of uses but best of all when the meat has been eaten, is the lentil soup made with the bones.
Posted by Unknown at 4:42 pm

Oh, your daffodils are blooming! Mine are just green tips barely peeking through the soil. Spring is very late this year having been pushed back several times with cold snaps.

It's been the same with us, and it makes daffs all the more welcome.

My daffs are just now pushing up past the leaf litter. Am looking forward to their blooms and to the forsythia.

Spring is late arriving here in southern Pennsylvania, too, for the same reason Marja-Leena gave. However, the aconite and snow drops are out in full force and lasting long because it is still so cool.