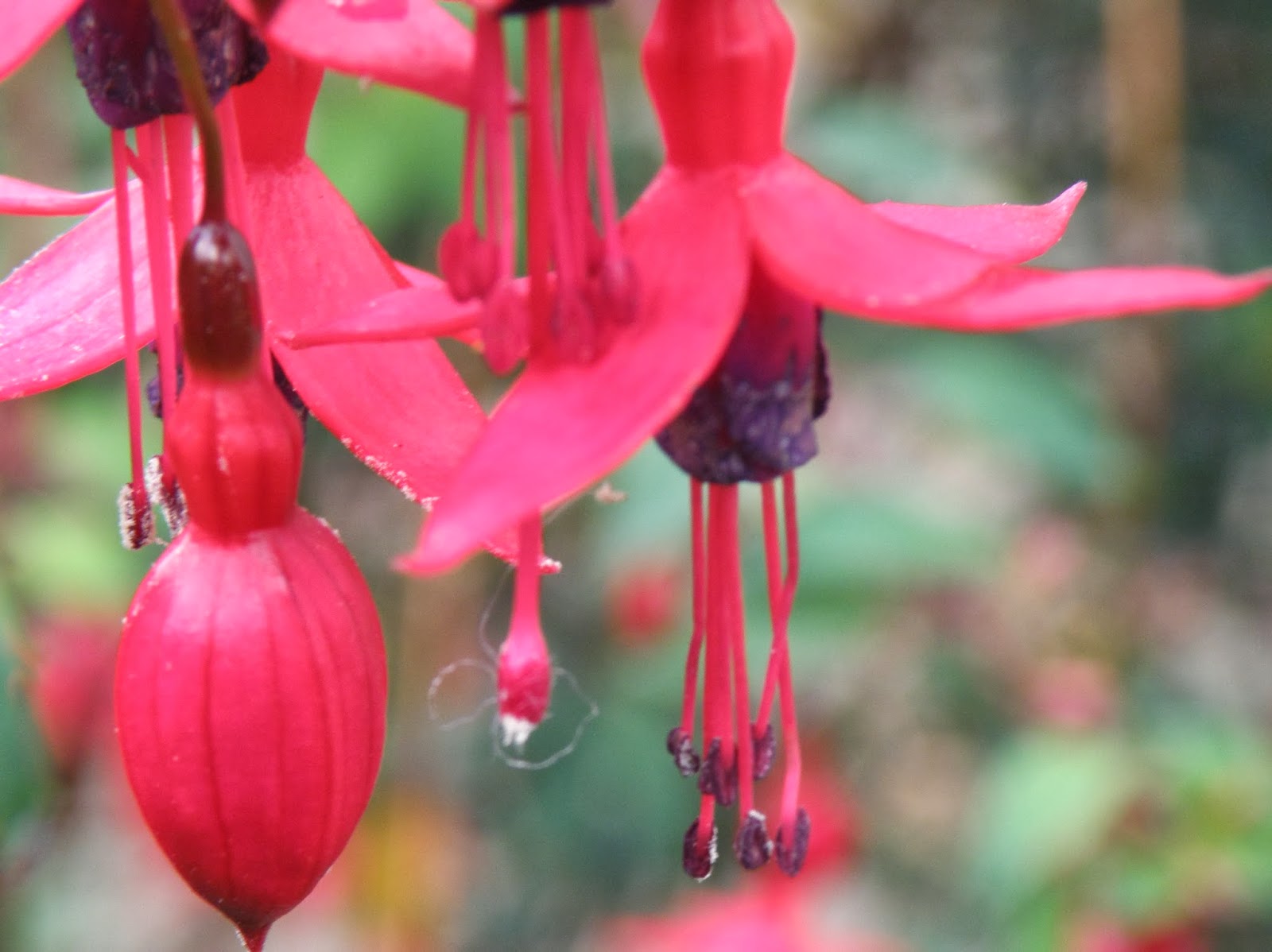 The tall fuchsia in the garden is still flowering mid-November. It is  my excuse for fishing this photo from the archives for today's post, the first after a long period of enforced absence. It is after all an image of persistence and survival.

When I began this blog back in 2005  my aim was to note  everyday three things of beauty and interest. Over the years the target broadened to allow for the curious, the ironic and the absurd. But it was always important as far as I was concerned to avoid  beefing and moaning. And for the most part I believe I have succeeded. Even when bad things happen there is usually a shine somewhere to be found like the gleam on the leather surface of a cricket ball which a bowler has produced by rubbing the ball on his trousers to make it swing through the air with ease when he releases it in the direction of the batsman.
How then to handle polimyalgia rheumatica, (PMR) which struck me down after a nasty bout of flu? To say not hing of the flu itself, if flu it was 10 days after a flu shot? The best I can do is to say that I have learnt how to spell the damn thing and to pronounce it. What is it? An inflammatory disease which afflicts the joints from the neck to the hips  making all movement extremely painful. Fortunately once diagnosed it is easily treatable with steroids. The proof of which is this post and a more mobile and flexible poster than has been manageable for the last few weeks.
Everybody, thank you so much for your comments and concern which have proved the best of all tonics. I'm specially grateful to the Canadians who took time off to write, despite problems with the lamentable mayor of Toronto. It seems that we are not alone in having one or two ghastly politicians

But the tale of woe doesn't end there. Heidi who doesn't like being mentioned here, after putting up with my illnesses, has gone down herself with jaundice and some nasty pains. She  is at present being investigated in hospital, so the shine is becoming harder to find. We are  waiting for news, consoled only by the fact that she is in our new Tunbridge Wells  National Health hospital (one patient per room) and looked after by a doctors whom she knows and respects. We are taking each step as it comes and she and I remain cheerful, helped by supportive family and neighbours.

Wonderful to have you back again, Joe. There has been great concern in this household, torn between seeming to badger you and giving you your own space. Our best wishes to you and Heidi, (if you can slip them into Heidi's hospital bed without her knowing from whence they came :) ).

It's a beautiful thing to see you here again, Joe, that's for sure.

Thinking of you both.

So glad to have you back, Joe. So sorry to hear about the health setbacks both you and Heidi are going through. You are allowed to complain in spite of your strict vow to not do so! Fred and I send our best wishes to you both!

By the way, we're thankful to not be Torontonians but have pity for those who are. There are, though, plenty of ghastly politicians all over this country, starting in Ottawa. Now there's a complaint :-)

From time to time you have misspelled words accidentally. As a sort of therapy I feel you're entitled to misspell PMR intentionally. Go ahead, you'll feel better.

And we'll feel positive on Heidi's behalf. Recalling that drive out to a village pub just beyond TW where we sat as a quartet, ate simple food, chatted and watched the world go by. The name of the village forgotten, but not the sense of pleasurable tranquillity. All the best for Heidi from both of us; there's something so typical about the dogged way she must have looked after you under the most difficult conditions.

So pleased for your return! Blessings on both of you. November is truly a difficult month.

Cheers everyone. Your encouragement is wonderful.

Robbie, just in case you think I hadn't found out how to spell the dreadful polymyalgea rheumatica, I had written it down correctly in my note book.

I have decide against copying it a hundred times on to a piece of paper or even a Word document, having left the practice behind when I left prep school. Cheers.