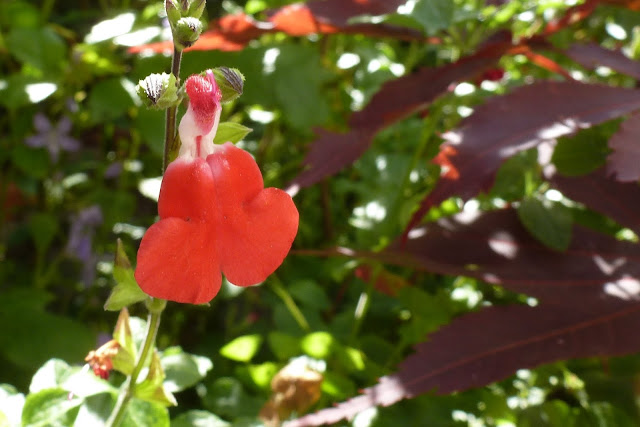 Salvia is the name used in many Mediterranean countries, sauge in France for the herb which we call sage. The family includes more than 700 species distributed throughout the world. Salvia officianalis is the powerfully aromatic herb used here in stuffing and in sausages. Various varieties of garden flower meanwhile are referred to in England as salvia, though they are grown for their appearance rather than for  culinary  purposes .  The flowers of the one in the photograph which comes up every year in our garden,  flutter like butterflies  among the leaves of more assertive plants.

If you are looking for comforting words, which from time to time, in a cruel world can be be helpful, The King James Bible and the Book of Common Prayer offer riches which reach deep into most of us. But for me the most comforting words in the English language are those of Julian of Norwich the anchoress who lived in the 14th Century, surely on  account of the ravages of plague alone ,  among the harshest in English history. T S Elliot borrowed them  without acknowledgement in the fourth of his Four Quartets, Little Gidding. "And all shall be well, and all manner of thing shall be well." At one level all may be far from well. But they are I think comforting because, detached from physical travails,  they contain, (the essence of her optimistic theology) an abiding promise of tranquillity if of nothing else. Something close to the state delivered by great  music.

At the doctors surgery an old lady is discussing an appointment with the receptionist. There are complications which are gradually resolved. Once  business is out of the way  the lady says  to the receptionist.
"Excuse my asking but did you get your Brazil nuts."
The receptionist blinks in surprise and puzzlement.
"Last Christmas. I was standing behind you in the queue at Sainsbury's. I said to myself its her from the doctor's. I felt I had to ask you."
"I 'm sorry I can't say I can remember." Then: "Oh yes  I remember.  I got some in the end but nobody wanted to eat them."
Posted by Unknown at 5:20 pm