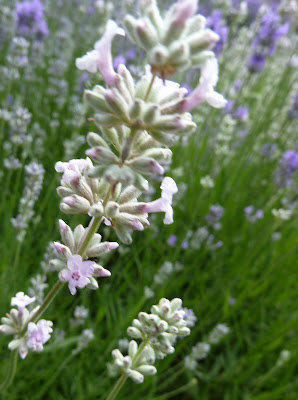 White lavender, among the blue, is worth a walk to the sunken garden in the centre of Calverley Ground.

In the twitten, where the door of a flat, gives on to the path, I notice on my way to the wheelie-bin, a bowl of fruit on the step. On my way back, a girl appears at the door apologising for the presence of the bowl. "There's a spider inside," she says. An arachnophobe myself, I sympathise. She sets about removing the fruit, hoping that the spider will have escaped the bowl. But no such luck, there it sits, now that the tangerines and apples are out of the way, in sole possession.. "I must get rid of it", she says. Her boyfriend appears behind her. "I'll move it," he says asserting his masculinity  but without so much as a gesture to confirm any intention to evict the creature. Tentatively, she tips the bowl, and away scuttles the spider. I tell her of a wheeze of my Dad's. "He used to roll up a news paper to form a cone. The end of the cone is closed, but the open end,  is a dark  and safe hole into which the spider is encouraged to run. With the spider inside, the device may be be shaken in order to release the spider in a suitable place". She grasps the idea quickly and with evident pleasure. "I'll remember that, " she says, and adds for good measure, "have a nice day."

When it has rained at night and the sun shines in the morning and the earth is soaked and the thirst of plants has been slaked, the world seems a better place.
Posted by Unknown at 5:33 pm

Enjoyed the spider story, especially as no one harmed the creature. I too will remember your useful hint. Thanks.

I'm afraid I have passed on my fear of spiders to my grandson, whose solution is to stomp on them when he sees them.

I'll teach him the paper cone trick as an alternative. Of course, the spider would be drawn to the dark interior; makes perfect sense!

There's a calm and profound ring to the third one (I love that word, 'slaked'). And the lavender looks fragile and lovely; the atmosphere of the photo suggests early spring instead of July.