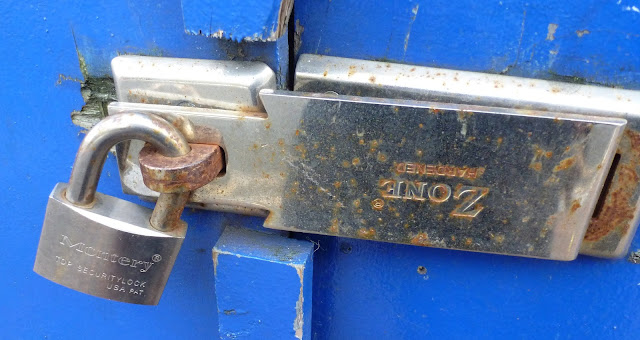 Locked, bolted ,excluded, done. Part of the wooden wall erected outside the abandoned cinema in the centre of Tunbridge Wells. Now generally known as The Eyesore. More photos to come.

Glyn greets me as we pass in the street. "Been walking round the Tunbridge Wells "lakes", he says. "See much wild life?"
"I told myself I could see 40 species of birds during the two hours it took me. And I counted precisely 40 species. Par for the course."

Last winter they severely pruned a sprightly  maple in The Grove.  Though it looked as good as dead, later than  other trees it sprouted a halo of leaves round the stumps of lopped branches. Now that Winter is setting in, it still has its leaves, some of them green, others turning yellow and red, long after the other trees have shed theirs.