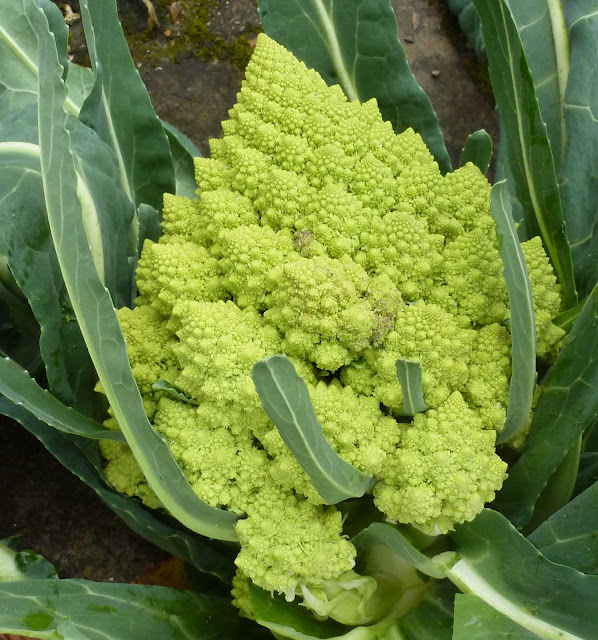 Just one romananesco. With some luck and some knowledge and experience all the plants which I set out in the vegetable garden  in the summer would have produced heads like this one. So far the majority have sprouted separate stems and effectively gone to seed. Why this one behaves as it should  have done I do not know because all the plants received equal treatment. I suppose relative failure makes this something to be proud of. A bit like cauliflower and a bit like calabrese but better than both, this is a vegetable which it is worth persisting with.

One of the first sights that greet babies are faces bending over them and making gurgling noises. It strikes me that the human face, reduced to two dots a vertical line and a horizontal line, becomes for ever a recognisable symbol. So in examining patterns on walls or on rock surfaces, we look unconsciously for a human dimension. For this reason if a painter wants to produced a truly abstract picture he has to steer clear of the pattern. On the other hand the emoticon which hasn't been around very long is almost entirely dependent on it. Today I take a photograph of the cross section of a sealed gas pipe. As soon as I look at the photo I see a  rather sinister human face.

Yesterday, visitors. A tarte Tatin  - an upside down apple tarte is turned out in their honour. It is a most pleasing dish to produce. You caramelise (with lots of sugar and butter)  some apple halves  in a pan and when they have lost some of their moisture, cover the pan with a circle of short-crust pastry and put in the oven for 20-25 minutes. The pastry rises up to form a shallow dome which is going to be the base of the tart. When it is crisp and golden brown you put a plate over the pan and turn the pan over. The tart emerges with the mounds of apple glowing a rich gold. You must of course remember when cooking the apple halves to place them in the pan with the cut side facing upwards.

Are you able to translate all emoticons? I can't I'm afraid which is sad because they occasionally crop up in comments to my blog, apparent;y making a point that is in contra-distinction to that made by the words. Of course I may be ascribing too much subtlety to them.