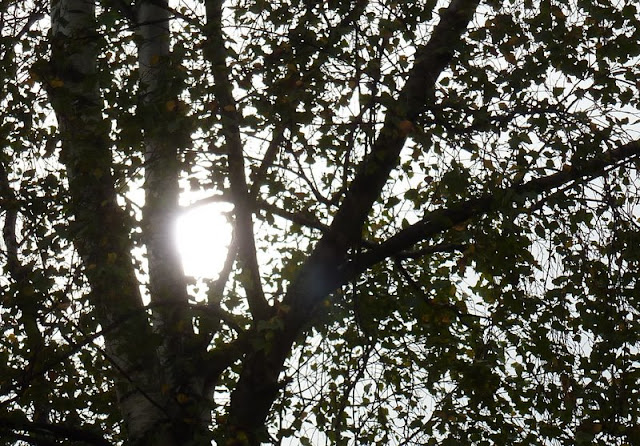 Sun hiding behind the branches of a silver birch and a thin layer of cloud.

One of the gardeners working in Calverley Grounds tells about the excavations taking place. There is going to be a skating rink installed again this year, though of a more stable variety than last year's ramshackle structure, one hopes. Cable is being laid under the grass and lights hung ready in the trees.  We hope that it will look better than last year. Little harm in the prospect of people skating on a sheet of ice over the Christmas holiday.Good for family outings even though they will doubtless be expensive. An expensive measure for the Council at any rate.  "It's only our money," says the gardener.

I congratulate some  people whose house adjoins The Grove on the contents of the holly tree which hangs over their garden. It  is as ever alive with sparrows and pleasure to walk past. "The Council has agreed to reduce its height by 15 per cent," they tell me. "I hope the sparrows don't mind," I say aware of the declining number of the birds in London, but I sense that the extra light afforded by pruning, is of more importance than the welfare of sparrows.
Posted by Unknown at 4:40 pm