Pretzels, the owl that never was, dandelion diversion 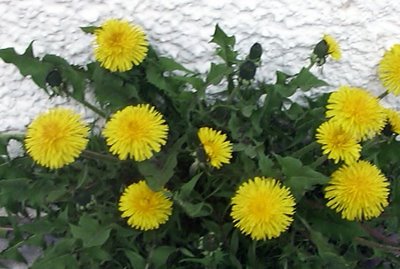 A good year for dandelions

Pretzels are taken for granted for people who live in Munich, but for visitors, these freshly made twists of glazed and salted bread are a special pleasure. You eat them as an accompaniment to most meat and fish dishes. They go particularly well with the delicate Weiswurst, white sausages, served warm in a bowl of the water in which they have been cooked. I recall, with particular pleasure, the pretzels served with hot, barbecued, whole smoked mackerel at the Chinese tower in the Englischegarten.

A walk in the woods behind Nymphenburg Schloss was a special pleasure because of the ducks and wild flowers, but we didn't see the owl, which was supposed to inhabit a particular tree by an arched bridge over a canal. The absent owl became like a character in a fairy story upon whom a spell had been placed, or who had placed a spell on you.

Back in Tunbridge Wells, when I remark to my friend Peter, who is driving back from the supermarket, that it is a good year for dandelions, he turns right into Major York's Road instead of keeping straight on home. "I want to show you something", he says. In Rustall, he reverses ; and there on the grass verge where the daffodils have just faded is a mass of dandelions, dense and golden, such as I have never seen before , a carpet which bareley allows the new grass to show through.
Posted by Unknown at 2:18 pm