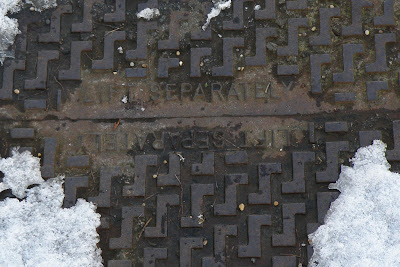 The snow tends to melt or not to settle on man-hole covers. It must be warm down there.
.
The snow brings silence or something close to it, especially in the morning, when the birds are silent and there is no traffic or little of it. The cars that do pass seem to be muffled by the snow beneath their tires, and they drive slowly with extreme caution. When I venture out this morning I realize that the silence is illusory. You do not hear the usual weekday sounds; instead there is snow falling off branches, the distant scraping of a shovel, the shout of a child, and in the background, a murmur of quiet voices, the voices of people saying how cold it is, how pretty the snow is.
.
People talk to one another more than usual. An elderly man greets me this afternoon on the way to The Grove. He has a theory that some of the original pan-tiles from The Pantiles parade have been recycled and are somewhere beneath the paving in The Grove. He is a local historian, and facts and theories pour out of him. The original Tunbridge Wells clay bricks now fetch £1.oo each, he says; they are bricks that were used to line the London sewers. "I'm off to see if I can skate on Dunorlan Lake, he says. I am impressed because he looks older than I, and skating on Dunorlan Lake is decidedly beyond my scope or ambition.
Posted by Unknown at 11:02 am

Inspired perhaps by Raeburn's 'The Rev. Robert Walker skating on Duddingston Loch' a painting so stylish and memorable it might encourage even me to skate

ah but can you stand on one foot gliding forward for two hundred and fifty years ?

er, um, sorry ... its only been only two hundred and fifteen so far

Tristan: Sorry, should have accorded you your proper blogonym. Love, Isolde