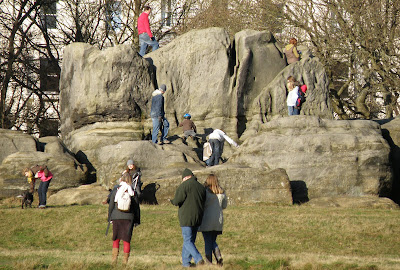 Wellington Rocks, the highest point of The Common are one of a number of sandstone outcrops in and around Tunbridge Wells. People usually arrange themselves over and around the rocks, with which they seem to have an affinity.
.
Above the cross roads opposite the Town Hall, a seagull circles as though looking for an opportunity to land. It circles several times but cannot assure itself of a gap in the traffic. The lights change and for a moment the space in the centre of the road is quiet. The gull swoops and collects a long, thin sandwich crust, which only the hungriest of mammals would have spotted. It barely lands, picking up the crust in flight as it might capture a fish leaping out of the sea.
.
Two opposing streams of traffic make it difficult to cross Grosvenor Road opposite the convenience store. A tall, elderly man with stick, doesn't hesitate for long. He passes elegantly through the line of cars, acknowledging, with a calmly raised arm, each line of vehicles as it lets him pass.
Posted by Unknown at 4:30 pm

"He passes elegantly through the line of cars, acknowledging, with a calmly raised arm, each line of vehicles as it lets him pass."

I like this. The "characters" that stroll in and out of our lives. How we don't even know who they are, but they leave such definite impressions of their personalities on us (and we're sure we can write a stories about them).

Obviously it's Disgusted, out for a stroll.

Those rocks are of a very comfortably human size and scale, it's not surprising they're popular.