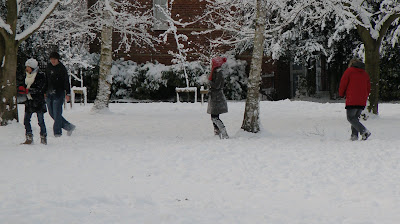 Snow in The Grove a few days ago, is today just a memory. So rare has been snow in recent years, that it has the quality of a childhood memory. As I survey the sodden grass in the grey light this afternoon, it is one of those memories, which seem to be magical and hard to believe
.
In the shop which sells electronic accessories, I hear a woman say to a man. "Look a crossword solver! You should give it to your mother." Says the man: "God, she'd never use it." And I think to myself, I don't blame her. I speculate on the possibility of a jigsaw puzzle completer. An assistant in the shop meanwhile sees me writing in my notebook. He thinks that I am checking out his stock. "Are you alright, sir?" He says.
.
At the edge of The Common, the remains of three big snowmen watch the traffic pass. They are no more than three mounds of snow but there is a sense of brotherhood about them as though they are offering each other mutual support in difficult times.
Posted by Unknown at 4:31 pm

My maternal grandfather and his only son led, on reflection, misanthropic lives. Dissatisfied with the simplicity of bought-in jigsaws they completed them upside down. A typical West Riding stunt. There isn't much to be said about doing jigsaws but at a stroke they removed what there was.

A jig-saw puzzle finisher? Now there's a test for an inventor's ingenuity!