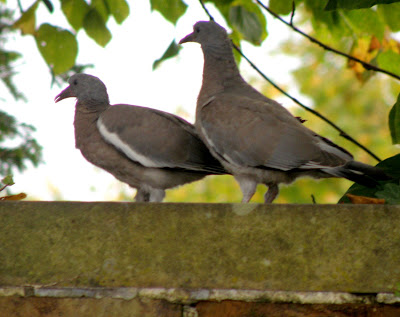 Newly fledged.
.
Outside a sports shop, they are demonstrating a climbing machine. It consists of aligned, broad caterpillar of linked metal sheets, on to which handles and footholds are fitted. It passes over rollers at top and bottom, and is constantly rotating, so that climbers, who attempt to ascend it as they would a cliff face, are struggling with a surface that is moving downwards as they mount it. The device must be four to five metres high. Two children at a time, equipped with safety helmets, attempt the impossible never getting more than half way up. They undertake their task voluntarily, unlike Sisyphus in Hades, who you will remember was condemned for his misdeeds in life to push a large stone to the top of hill from which it always rolled down again.
.
In Calverley Ground, this afternoon, a thin, old man props his bike against the bandstand and strips off to a tee shirt and blue shorts. With some difficulty, he runs slowly up the steep, grassy slope above him, turns and runs down. Then up again and down again, up again and down ...
Posted by Unknown at 3:02 pm

You explained the mechanics of this device beautifully but I am mystified as to its purpose.

I was and to some extent still am mystified. It seems to be an elaborate training device for climbers or would be climbers - a mobile version of those climbing faces wiht coloured foot and hand holds that you see in specialised gyms.

Are those fledgling Stock Pigeons?
Never see any this side of the pond.

They are what on this side of the pond are called wood pigeons, I think. At first I though that they might be ring doves but they are too big and clumsy and I suspect that, if they were, the distinguishing black ring on the neck might have begun to show even at this early stage in the birds' life.