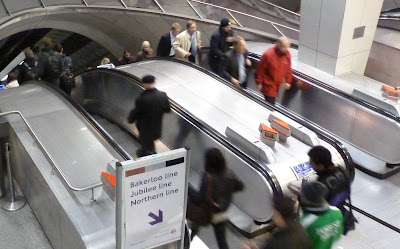 ﻿
Entrance to  the underworld.
When I was at school I edited with a friend a literary magazine to which both pupils and parents contributed. Among the senior  contributors was the poet Kathleen Raine whose collected poems I have in front of me. I remember one of her poems in particular. It was called Amo Ergo Sum. It began with the lines "Because I love,/ the sun pours out its rays of living gold/ pours out its gold and silver on the sea." I  it remember especially because it was my first of many encounters (anticipating my later employment as an editor which extended for some time into the era of hot metal) with a compositor, or type setter. Knowing nothing of type or magazine layout at the time, I remember feeling immense gratitude for his help. Only his unfamiliarity with Latin and Descartes caused surprise when he referred to the author of the poem as Ergo Sum. It is the wrong reason for remembering a beautiful poem, but such is the way events work on us.
Chris who cuts what remains of my hair is a gourmet. He tells me that he has just cooked and eaten some "Kobe-style" beef. Kobe beef is exceptionally tender, evenly marbled meat, which is  to be produced in the remote region for Japan form which it gets its name. Legend has it  that each animal is looked after by its own keeper and massaged daily with sake. The animals are said to be sustained on beer and corn. Some farmers in the UK and elsewhere in the world are now producing tender beef with similar care and attention (hence Kobe style), though I doubt  that  the detail matches the myth either in Japan or elsewhere. I ate some of the genuine stuff once in Japan and can vouch for its tenderness and flavour. Chris says that having cooked and tasted Kobe style beef he is now intent on trying the real thing. He has found a supplier who charges £160 per kilo. "It's cheaper than going to Japan,"  he says.﻿
Posted by Unknown at 5:14 pm

Plutarch! Have you been to Japan?! I had no idea. I once had 3 cubes of Kobe beef. At first, I had no idea what wonders awaited my taste buds, so I ate the first cube much too quickly. The second was a feast all on its own. And the third ...

I spent a week in Japan, but long before that I was drawn to the culture. Haiku, bushido, Japanise tea and archery were and have since been important to me. A friend at university for some unfathomable reason gave me a samurai sword. If you are interested there is a Japanese episode in one of the poems in the Compasses exchange which I have with Lucy. It draws in particular on an encounter on The Bullet Train and a walk on damp day in the Zen monastery in Kyoto. It is four or five poems back in the sequence.