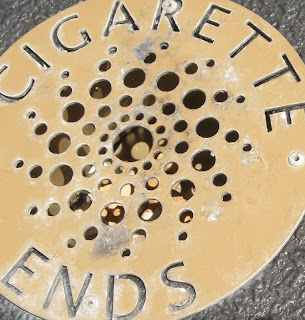 One of the least appealing aspects of smoking is the sight of a full ashtray. This one outside a pub hides its more gruesome ingredients. Though not a smoker  I am not entirely against the practise. Smoking in old movies  helps to provide a background which if not romantic is attractively sleazy. True it damages your health and worse, but so does booze and too much food. If I were a smoker and wanted to give up I would study ashtrays.

In the fishmongers I am attracted by the sight of a bundle of  razor-clams held together by an elastic band. From one of the clams emerges something white as though tentatively in search of the sea. The creature is alive, and so am I, a seagull in man's clothing. With difficulty I restrain a wild cry such as seagulls make when excited. Instead, "I'll have a couple of those," I say to the fishmonger. They will go nicely griddled with the fresh prawns I am in the process of buying.

Using his fingers, a man is pulling out small tufts of grass from between the bricks of the pavement outside his house and from the angle between the pavement and the wall. Such neatness I say to myself is noteworthy. I stop to pull out my notebook, and steal a look over my shoulder to see if he is really engaged such meticulous and careful work. He is. The tufts of grass are minuscule.

The idea of a seagull in man's clothing roving the aisles of Sainsbury's in search of a bite to eat is very nice.