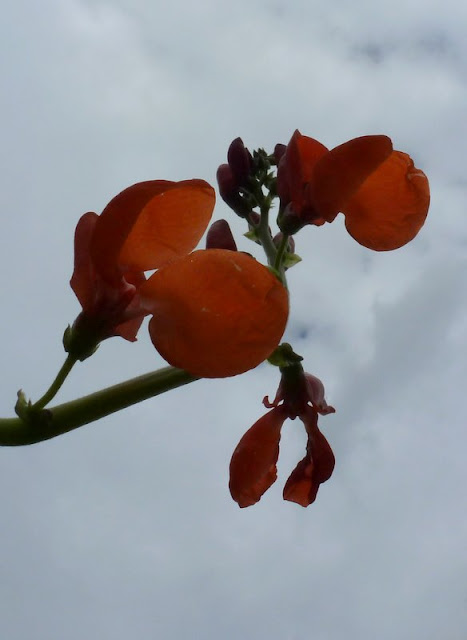 One of the last of this season's runner-bean flowers. Some varieties of runner bean are now white- flowered and some purple. But scarlet is the most common and I believe the original colour hence the alternative name for this type of bean, scarlet runner.

"Never a dull moment in The Pantiles" says a regular visitor to Hall's Bookshop this afternoon. "Did you hear about the squirrel?" He tells us about a squirrel which he saw run into the furniture shop called Futons. It started leaping about  on the stock as though it was in the branches of a tree. It was quite savage. The women there were understandably scared. They called for the RSPCA who came and caught it. And what did they do? They set it loose then and there in The Pantiles instead, as you would have thought,  of taking it across the road to the Common. Sure enough a day or two later it ran into the kitchen shop where it went berserk. Eventually they shut it into an office upstairs. The  RSPCA came again and this time they shot it.

The current theme on which contributions to the literary magazine Qarrtsiluni are invited is Animals in the City. In that context the aforementioned squirrel might have been looking for attention. So too might the animal which last night attacked the pots of herbs under our hedge uprooting a rosemary plant and digging out an advanced and prolific pot of parsley scattering volumes of compost all over the place. Not a cat. Surely not a squirrel. More likely a fox.

Gosh, I wonder if it was rabid? How exciting!

Squirrels are angry this year but so are some humans. I heard about this person(man) who build some kind of a platform, studded with headless nails, around a post not to be climbed. Should the squirrel slip, you know what. I won't tell what I feel like doing with his toilet seat.

Shot a squirrel? It was one of those rural myths that Tennessee farm folk were so poor they shot squirrels through the eye so they could sell the unperforated pelt while eating the remainder. But perhaps the RSPCA have a tiny gun specially for the job, dangling from the officer's watch chain.

Please do another post about the nature of the gun.