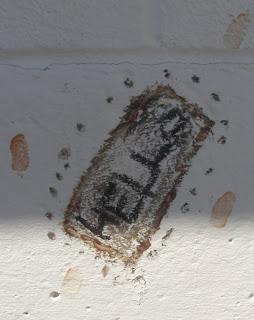 Not sure what this says or means to say but it intrigues all the more with its circle of dots and finger prints.

Last year and the year before three pigeons were more or less permanently in evidence on the parapet of the house opposite. They was clearly a pair and a third party almost certainly a male with an eye on the female. Though the outsider was tolerated the male member of the pair would see him off if he became too familiar with his mate. In the evening we would watch a sort of pigeon soap opera as the pair enjoyed the evening sun in between episodes of love-making.  In the morning one of the pair was always in the same spot peering down into the road. Sometimes I wondered if I imagined that the pigeons I was watching were the same birds, but now that they are no longer around, their very absence tells me that that they were the same. I miss them.

A coded message: look I got a brand-new felt-tip for my birthday, and now it's ruined.