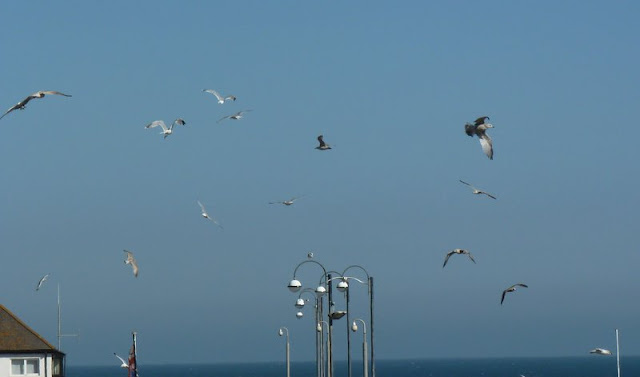 Talk of Hastings and think of seagulls. In the old town where tall, black painted fisherman's huts dominate the architecture. The seagull are big, sleek and fat. Even the young in their grey-brown feathers with short necks are plump as piglets. No need to dispose tidily of a fish head. Just throw it on the pebbles and the birds fly up in a wild flurry screaming as they wheel and  dive until they come down upon it as did the Assyrian like the wolf on the fold.

It's the same every year. Too many beans for comfort. I spend more time harvesting them than I did cultivating them. Lithe French beans and  fleshier runner beans are on at the moment.  Leave the runners too long and they become coarse and stringy. Even worse are the courgettes which quickly turn into old fashioned truncheons and eventually huge vegetable marrows. To persuade people to accept the gifts of surplus produce I find myself thinking up recipes to entice them. " Scatter pieces of feta over the beans. Grate the courgettes saute them, throw in some basil  and make them into an omelet", I advise optimistically. Today a more distant neighbour says he would like beans and courgettes but looks askance at the green truncheon I offer him. My problem  is that nothing beats the sheer pleasure of making the vegetable grow in the first place. What's all that about reaping where you sow.

In the fish mongers there are strings of French garlic. None in the garden  this year. The string looks a bit cosy in the kitchen. Must be lavish with it.

Yes, our first, small, potimarron type pumpkin made more than two good meals for us, how to get through the mountain of them to come, even giving them away, when many people grow their own anyway? But it was good, and as you say, it's the pleasure of the growing.

The French beans you could leave to grow and dry - or partially dry and keep in the freezer to use in soups and stews...

I am emerging out of the mists of blognyms as my true self. Just testing

Lucy Sympathy appreciated. I always leave a few French beans to ripen in the pod. As you say they are excellent on their own. In Spain you often see the withered ripened pods for sale in green grocers at this time of year.

Roderick Robinson To thine won self be true.

I just remembered a story about a place in America, I think, where courgettes - zucchini - grow in such abundance that they say you should never leave your car unlocked during the zucchini season as when you return you'll find it filled with them.

(I do think RR should have had something to say about his great love of cucurbitae...)