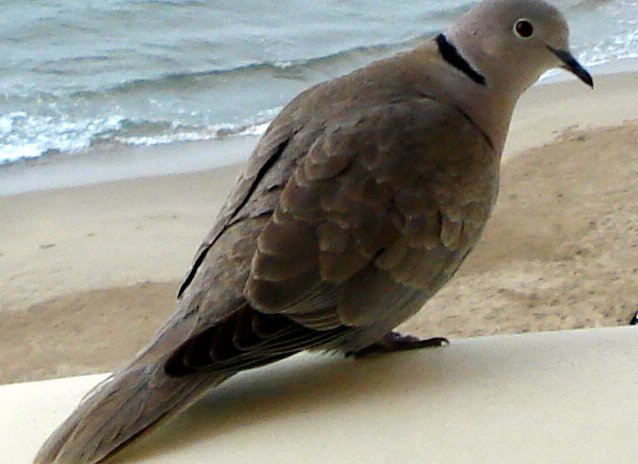 This is the second time while on holiday  that we have been visited  on our balcony by one of these pretty birds, so much more elegant than their wood pigeon cousins. In previous years there have been relatively scarce, but 2012 must go down as the year of the collared dove.  Several pairs are always around fluttering down from the palm trees and running over the paving stones beneath chair and table legs and human feet in search of scraps. Like human they frequently live and hunt in pairs. But as in London scarcely a sparrow is to be seen this year.

The fiesta of Santa Tecla as usual comes on the middle weekend of our holiday. And with it fireworks. Twenty glorious minutes of them starting at 11pm. Our balcony is a good place to view them. Tonight they shoot up, explode and scatter their brilliant drooping fronds against a gibbous moon which hangs persistently in the dark sky when the lights have faded. Meanwhile observing the display from an adjacent piece of sky is a radio controlled flying machine, a sort of model helicopter, which hovers above the sea, transmitting photographs I suppose to a monitor on the beach where  a shadowy group of people are bringing a new dimension to Santa Tecla. It zooms up, its red and yellow navigation lights unblinking in the sky well to the left of the fireworks. After a while it glides down to the dark beach and lands in a designated spot on the sand.

This windy morning a silvery sun gives the waves an oily sheen as they gather and break on the beach.

The latest story in One Fine Day is called The Centurion. See http://www.hnjh.blogspot.com
Posted by Unknown at 4:32 pm