Nectar, gourmet goes ga ga, and an armful of wormwood 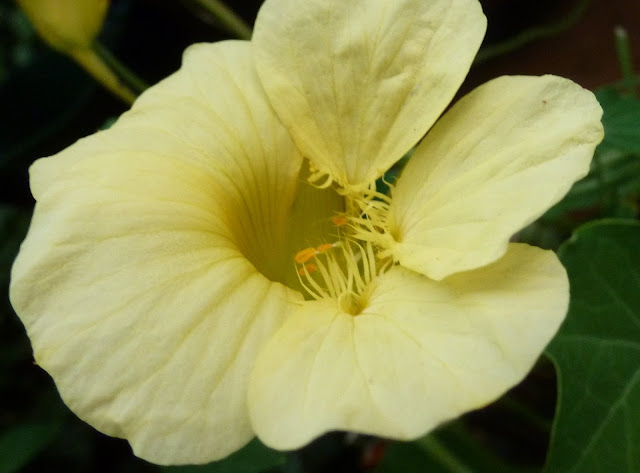 A packet of "gold" (it turns out, pale yellow) nasturtium seeds this year produces a pleasing contrast in the garden. But only just. The seedlings in the greenhouse germinated but  grew straggly and weak because the cold Spring prevented me from planting them out when they had reached the appropriate size. The red flowered plants proved stronger, but two of the yellow made it  and flourish. Imagine yourself a bee looking for colour signposting nectar. 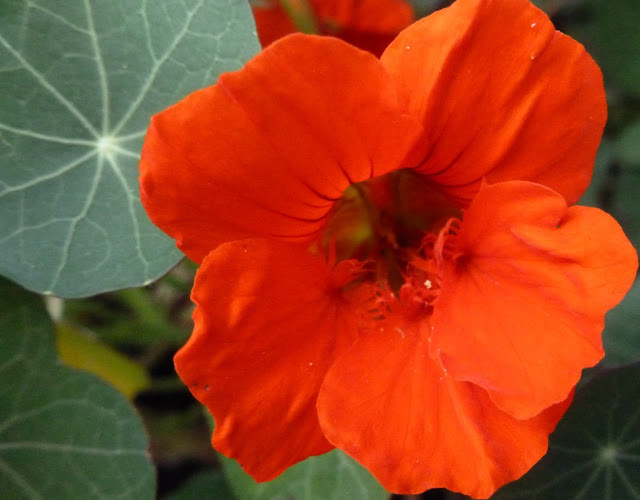 "Gourmet" at least in English speaking countries is becoming a terrible word, on the path to being meaningless.  "Gourmet paninis" I read on a blackboard in The Pantiles.  Paninis  are street food . Nothing wrong with that but are they sought by  gourmets? Why not a  gourmet bacon butty or gourmet baked beans?   Or gourmet spaghetti rings? Don't worry. They'll be on the the way.
The herb bed in the vegetable garden is getting out of hand. Tall plants like wormwood, tansy and fennel are reaching for the sky. Because the bed,  which backs on to a wall,  is facing south, weighed down by droplets,  they lean forward towards the sun and across the pathway. After last night's rain I embrace the dripping wormwood stems to tie them back. The aroma intrigues. Is this what absinth smells like? It is a sensuous as well as an uncomfortable experience.
Posted by Unknown at 5:46 pm

Am I right in assuming that the phrase "gourmet paninis" first saw the light of day in Tunbridge Wells? Nice to know you're in the vanguard of linguistic (and culinary) development.

I doubt it. Probably 25 years ago when I was still commenting on the catering industry I deplored a new chain ( it is probably still in existence) which used the noun "gourmet" as an adjective in its title Gourmet Pizzas. The chain took me to task for my criticism. What they were trying to tell me was that their pizzas were posh or at least posher than other pizzas, and they had the right to say so. Well, I suppose they did. The language changes. How about "gourmet music" as an alternative to classical music, to return to an early theme of yours?

Gourmet music won't do. It describes the listener not the music. Also it implies certain (probably unjustified) qualities which unravel back to the reasons why I disliked "classical" in the first place. Presumed elitism. Given an ambiguous adjective one's mind (well, mine at least) tries to search out the antonym. Which I have just done for "classical":
nonclassical (vs. classical)
modern, popular, pop
Sense 2: authoritative, classical, classic, definitive
INDIRECT (VIA standard) -> nonstandard

Not terribly satisfactory but at least I've discovered there is an online antonym dictionary.

The point is that gourmet is best left to be a noun. It has never been an adjective as far as I know in its original language. Though it is not excluded from use as a metaphor. Balzac, I see, speaks of: "Les fins connoisseurs, gourmets de la littérature."