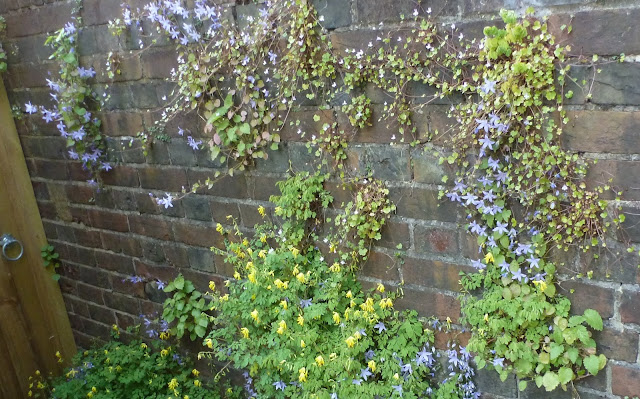 Vertical gardens are becoming fashionable. This one is at the entrance to a house in the neighbourhood has I suspect occurred fortuitously. The  plants grow wild in the area  on roadsides and indeed on walls and will be thought of as weeds by many gardeners. The yellow vetch-like flowers are yellow fumitory, the blue is a campanula that invades the most unlikely corners round here and the small ivy-leaved creeping flowers (top centre) are dwarf mallow.

Tennis has always been my favourite sport because I have  played it more than any other. But given the choice I prefer cricket, test cricket in particular. As Andy the chiropractor says to me, 'thank God the tennis is over'. What has spoilt it  this year is:  the hysterical adulation of Andy Murray in  the media; the Wimbledon crowd  applauding his opponents unforced errors,  even double faults;  the Prime Minister making political capital out of game (a knighthood indeed) , and the dreadful commentators  (why do we need three of them?) vying with each other to state the obvious in the tiredest cliches their limited  minds can fathom. I long for the sound of willow striking willow and the polite applause of a crowd  appreciative of the complex of skills and character that you find on the cricket pitch and in the outfield. And the meditative commentary of the likes of John Arlott  and Brian Johnston.

As I push open the rear garage door on my way through to the vegetable garden, a shower of white rose petals descends on my head from a prolific rose that has grown in the last few days above the lintel. I feel like a bride or a prince in a fairy tale. Petals just petal have a magic of  their own. For some reason  I think of rose water and fountains and dancing girls.
Posted by Unknown at 5:25 pm

Better still, Richie Benaud. The consummate professional (The Guardian has been running correspondence about the inevitability of certain adjectives attaching themselves to certain nouns) who brought entertainment but without sinking into whimsy. On Rodney Marsh who had had to juggle two or three thunderbolts from Lillee or Thompson. "Marsh is looking a little unwieldy out there." Plus his absolute resistance to sentimentalising any of his final days with the BBC. Especially: "Training? Someone said, 'If you got nothing to say, don't try and say it.' That always seemed to work well."

You're right about Richie Benaud. If you got nothing to say, don't try and say it. Every Wimbledon commentator, please pay attention.