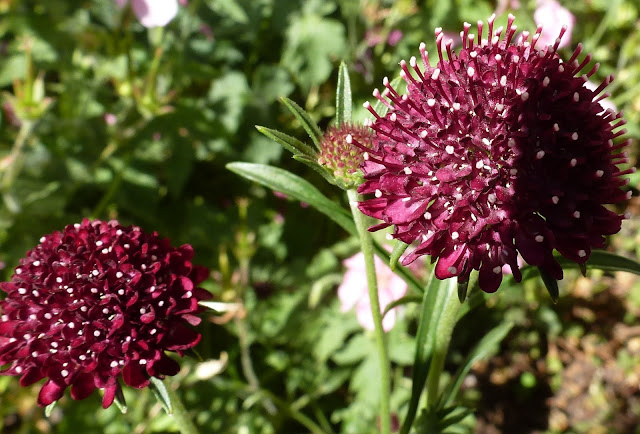 Various forms of scabious grow in the wild. This is a cultivated variety which is flourishing in our garden this summer.  Scabiosa Chile Black says the label from the nursery.

Paul the gardener across the road follows cricket. Before England lost three wickets this morning in the space of 12 balls, he predicts a five-nil series win for England. He may still be be right. Cricket and fine weather go together in my memory. I find myself checking the score automatically when I am not listening to the commentary. I can't bring myself to subscribe to Sky in order to watch it on TV. So I have to rely on steam radio. To think that we could watch it on the BBC before Murdoch snatched the contract.

I ask Andy the chiropractic  about McTimoney, the founder of the system which he follows. He tells me that McTimoney was an engineer before he became a chiropractic. Diagrams and models of the human skeleton dominate his practise room. It makes sense when you observe how bones and muscles are linked and work  together to facilitate movement and the desired fluidity of movement which unfortunately deserts us as we get holder. He ask me for a percentage assessment of any improvement I have felt in my stiff neck. Twenty percent I say, though now I revise it to 30 per cent.
Posted by Unknown at 5:11 pm

Good to hear things are improving on the chiropractic-al front. On another subject, if we are to win the Ashes 5 - 0, I'd suggest we try another opener instead of Joe Root. He was much better down the order. But who would he replace? If he were good with the gloves, the current wicket-keeper could get his marching orders. Still, all things considered, changes of players and injuries (KP and SB) we're not doing badly. Fingers crossed.