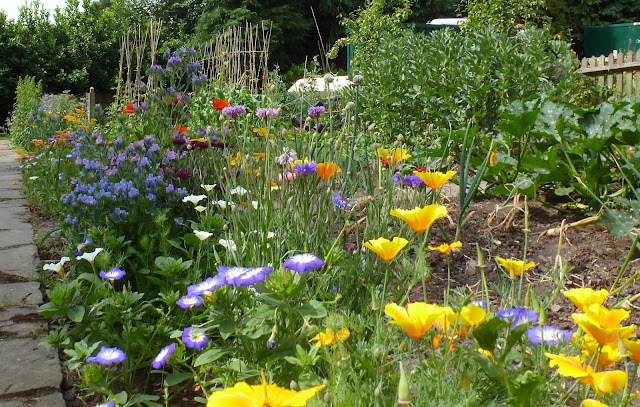 The vegetable garden a few days ago. Since the photo, the beans in the background have climbed to the top of the poles. The flowers which I have talked about enough have become even more prolific.

The Tunbridge Wells  Farmers' Market has a new look to day. It has has moved, with the help of a traffic diversion,  from the narrow strip of road alongside the town hall and public library, to the  parallel stretch of Mount Pleasant between the corner of Crescent Road and Monson Road. Now it look like a real market with a broad walking  space in the middle of the traffic-less road between stands and much larger stands. The  nursery stands selling garden plants give the impression of flower gardens. A dazzling improvement. Matthew Sankey restaurateur and fishmonger is meanwhile  cooking a vast paella on his stand.

All day we have been expecting rain. The forecast promises heavy rain by midday. But it doesn't materialise.  In our neighbour's garden we sit in the still warm heavy air under a sort of bower. After a prolonged glass of Bollinger, bits of pork pie and quail eggs, to celebrate the  neighbour's birthday, I retire to bed. War and Peace is an excuse.  I read  the chapter where Prince Andrew Bolkonski's, apparently dead body is noticed by Napoleon beside his  regemental standard on the battlefield. On discovering him  to be alive, the French Emperor  orders him to be taken to the dressing station. When I awake it has rained heavily for a few minutes unnoticed by me.

A beautiful garden, Joe, thanks for sharing.

Bollinger and pork pie. Well, 'tis said champers goes with anything. VR and I represent a marriage divided (yet also united) by pork pies. On her first visit to Bradford, still merely affianced, I showed her to my northern acquaintances one by one and at each visit she was offered a slice of pork pie. Which she loathes but which she ate acquiescently. A good augury. However there was better to come. Decades later she made me a pork pie - a truly heroic structure, encased in that special kind of pastry, the name of which escapes me. Stuffed with first-rate pork. It took ages to create and - I believe - great skill. I didn't dare compliment her, or even thank her, because I feared she might see such outpourings as a disguised request for another.

Re W&P. We accept Andrew as the prince's first name and yet it is hardly Russian. Is it explained? I can't remember.

Number one in Elmore Leonard's ten rules for fiction is don't start with a description of the weather. And yet the weather may propel the plot. I notice how subtly you have woven the weather into your third para but without resorting to direct description. We (so much better than I) had been "expecting" rain; later rain is "promised"; finally rain comes and goes without being noticed. Very good rhythm. Short sentences made to work hard for their living. Elegant but without apparently setting out to be elegant. And yet you did, didn't you (set out to be elegant). Interesting about those short sentences. They force their way in, as if somehow you were sight-reading a musical score. They cannot be predicted and yet when their time arrives they feel inevitable. Dah-dah-dah-dah. Dah-dah. Dah-dah-dah-dah. Prose fertilised by a deep love and knowledge of poetry. I hope my deconstruction doesn't embarrass you.

Thank you M-L. Gardens are best shared as Eve said to Adam forgetting that the serpent was listening.

Robbie I deliberately call Andrey Andrew because it somehow makes him more real.
When I was camping as a boy scout in Wensleydale a friend and I were detailed to collect pork pies from a butcher in the neighbourhood. Proper pork pies of course made with hot water pastry and all. They were not ready when we arrived. We were ushered into a parlour to wait where a televsion was broadcasting the cricket match then in progess between Lancashire and Yourkshire. When the pies were ready we were each rewarded one for out patience. As though patience was necessary. Perhaps the best of my food memories.

Not embarrassed but grateful for the acknowledgement of someone who also cares about the use of language and knows it beauty. I don't think one sets out to be elegant, rather just to get it right.