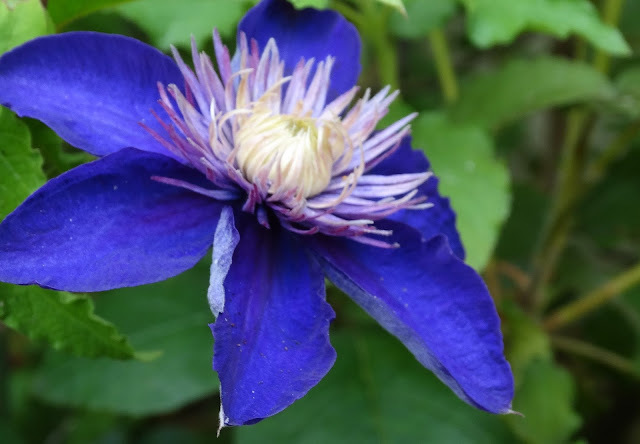 New to the garden this year, a clematis Multi Blue. In its second flowering it is climbing as I hoped it would into the cistus which closes shop for the year at the end of June. It the two ever flower together,  the blue and white will be a happy combination.

An old friend rings with a problem. She is committing her favourite poems to memory. A difficult task which she seems to accomplish despite her 80 years. Did I recall a poem which begins "Suppose we kill a king and then a king and then a king.."? She seems to think that we once discussed it in the distant past. If we did it has vanished from my mind. Who wrote it? Where can she find it? I am at a loss, but as we talk about it, leafing through a few indexes brings it to light. It is by Robert Horan, an American poet born in 1922. I can see why she likes it, and as I read it, it begins to come back to me, rather Jacobean in style, political, dramatic. "Princes are waiting everywhere; suppose by poison or by water, kill a queen; her daughter sits upon the stair...." Wikipedia tells me little about Robert Horan, who appears still to be alive. He was, if anybody cares,  a friend of Samuel Barber and Carlo Menotti.

In a magazine my eye catches a photograph of Sophia Loren. The caption reveals her age as 78. She is  the sort of person you don't think of a having an age. It strikes me that I am two years older than her, a piece of data which I imagine will be of little use to me now or in the future.
...

I wondered why you didn't Google the quote and did so on your behalf. Only to find that you (or your blog) had become the second reference in the list. The rest were in any case garbled versions (sometimes Google is just too clever) and I turned back to your comment box, a fairly regular residence during these rather sparse summer months.

Two things. I hope you comforted your friend regarding her project. Some months ago I decided I must memorise Lady Percy's speech to Northumberland given that I've marked it so prominently on my blog home page. I printed it out so that it would be readily available at all times and the single sheet of paper (the speech is only 38 lines long) is before me, blurred at one point where sweat complicated things as I worked at the speech while taking a bath.

38 lines - I expected no problems, having once memorised about twenty verses of the Rubaiyat (also in the bath). In fact it was extraordinarily difficult and my project foundered after 13 lines. Once I had simply transferred cadences to my mind, now I wrestled with words and their meaning. Age was at the heart of my problems I think, since I very much wanted to have the speech down pat. So I wish your friend well.

Second. I immediately responded to those lines from the Horan poem. But possibly for the wrong reasons. I felt proud about being able to recognise the link with your judgement Jacobean, felt smug in fact. Recalling the Duchess shrugging off death by strangling and asking whether her tormenters expected her to demand being shot to death with diamonds. But then I wondered if I would have been able to come up with that adjective in critical response, decided I wouldn't and became mildly depressed. You can perhaps see why poetry is such a minefield for me.

I googled first but to no avail. Remember I had only the first line of the poem. I can't learn poems by heart any more. I was never very good at it. But the ability such as it was has gone. Fragments hang in my mind like bunting after a fete. Perhaps it is just idleness. It was Liz who connected Horan's poem to The Duchess of Malfi. I who sneaked in Jacobean in my post.