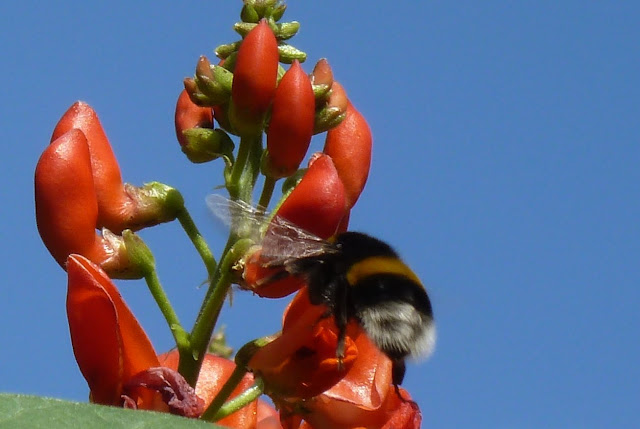 I ordered two varieties of climbing French bean seeds in the Spring, but forgot the runner beans. At the last minute I found a packet of the old fashioned but reliable Scarlet Emperor. They will probably be stringier than the modern "string-less" varieties, but they are demonstrating their vigour already and there is no doubting the impact of their colour. Early pods are ready for picking but you have to take care not to get stung by bees pollinating the fat later flowers.

A row in The Grove. Two bullying  magpies pick on a collared dove. They make noises like  timber quickly sawn. The dove is smaller but brave and stands its ground.  Says, bugger off. The magpies bugger off as magpies should.

Magpies are such bullying thugs. Good on the collared dove. Would love to be able to grow runner beans in France but, apparently, the climate is uncongenial.

The length of the bee's translucent wing is impressive. It is strange how the flowers have a kind of bean-like quality. Also if we did not now the size of bees this could be a huge landscape/

Tom We once saw a magpie sitting on a tree outside the window eating a baby blackbird. Thugs they are. But they are not alone. Much indignation over the roast quail which we ate for dinner the same evening.
But you can surely grow climbing French beans which in many respects are more congenial to the palate.