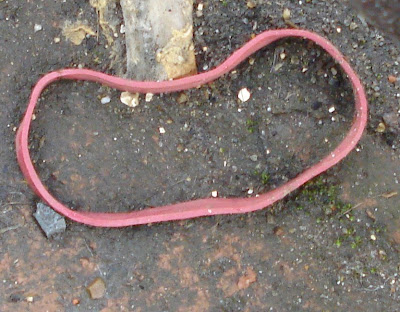 Rubber bands like this are a common sight on the streets of Tunbridge Wells (and I dare say on the streets of other towns in England). They are shed every few yards by postmen who assemble letters in packs arranged in delivery order. The packs are held together by the rubber bands, which are simply dropped, one by one, when no longer needed. I have often wondered how much the Post Office spends on rubber bands every year. Though it does not worry me deeply, I am, somehow, glad to be able to share this concern.

On the BBC 4 Programme Desert Island Disks, the guest is June Spencer, Peggy Archer(later Peggy Wooley) in the Archers of Ambridge soap opera about a farming family. She chooses eight records to keep her company on a theoretical desert island. She has played the part for more than 50 years and, as an actress, has, herself, loved, suffered and grown old, along side her fictional role as wife, mother, grandmother, pub owner in Ambridge. It makes me think about the blurred line between soaps and real life. I have always liked soap operas - the soap operas in the media and those which occur, immitating fiction, in our daily lives and the lives of others rounds us. Sometimes it is hard to know where the fiction begins. I remember, when I was still at school, working on a farm in the holidays. I was required, on one occasion, to hoe a field in the company of an old farm worker, who told me much of his life story, as our hoes dodged in and out of endless rows of turnips. He was, I soon found out, a regular listener to The Archers, which was already in existence in those early post-War years. His own story was woven into the story of the fictional inhabitants of Ambridge, to the point that I found it difficult to separate his life from theirs. To day, I sometimes feel that I have a similar problem with my own life and The Archers which I still listen to as a matter of course every weekday evening at 7pm

When you engage in something like this blog, you are occasionally assailed by the thought that it could be,  and probably is, boring, to some people at least. Is there a word for the fear of being boring? And one for the fear of being bored? As far as I am concerned, the former is worse than the latter. But I am on  the look out for both words, if they exist, to put a name to two of my special phobias.

Re: being boring. I have the same concern about my writing, as well. Perhaps it is the lot of writers to carry that concern?

I haven't found you boring yet, Joe.

Not to worry, Joe.
You're not even close to boring. I'd
say, just the opposite.

I love your musings and I can't tell you how often I've thought over one or the other of your posts with its potential for jump starting a
short story (at least).

I did enjoy hearing June Spencer, she was more interesting really than her character, though I thought a touch of Peggy slipped in, especially when she sniped a little bit about her granddaughter in Australia not getting to her 90th birthday party!

I don't think there can ever have a been a phenomenon like The Archers, in terms of how it keeps such pace with real life. I gave up on all the TV soaps long ago, largely because they seem to need to create further and further extreme sensation, so that the events in them become histrionic, preposterous, and frequently distasteful, and the characters grotesque and exaggerated. I think perhaps they get this way through the fear of becoming boring. Consequently, they become much more tiresome than The Archers ever does.

With regard to yourself and this blog in that matter, I know you will by now be squirming a little at your own apparent fishing for compliments. I'll only say that until now I have never read or seen anything here that was less than interesting, and usually much more besides. However, the expression of the fear of your being boring is so preposterous and such a departure from reality that frankly it isn't worthy of consideration.

Never a fan of The Archers I can however say I was watching Emergency Ward 10 when I learned of Kennedy's assassination. Looking back on that sorry admission I concluded that soaps et al. don't have to be good to cause addiction, the viewer (or in you case auditeur) must simply pass through a brief state of vulnerability at the right time and then addiction ensues.

As to blogging it isn't only apprehensions about being boring but about being obscure, coarse, ostentatious, OTT, etc. I've suffered all and more. I've been toying with paying you a blogliment and now seems the right time. I cast my mind back to 1963 when I unrestrainedly hacked up your stuff prior to publication and (possibly) came upstairs from the dreaded Hingston Room to engage in a little public humiliation pour encourager les autres. Don't for a minute think I'm taking credit but, these days, I wouldn't touch a word; I admire what you write, all the more so since the style has a special form of author's detachment which I know I can't imitate. I also admire you for continuing to practice an extension of what we both used to do (but I no longer) and that is to gather facts, write them down, and use them as the basis for something new. The essence of professionalism which is really a state of mind and nothing to do with getting paid.

I wasn't fishing. I am haunted by someone in this town who is perfectly well-meaning, but who descends on you in the street when you don't see him first, and then procedes to unleash on you at great length whatever happens to be in his head. I am afraid I do my best to avoid him and I am sometimes quite rude in order to escape him. The problem is that I fancy that what he does is what I might do, and that is why I occasionally have these thoughts.
Thank you all for your reassurance.

BB Yeh. Ever since 1963 you have been benignly and considerately looking over my shoulder.Even when you didn't know you were. And you still are, which is reassuring. So the compliment is gratefully returned. It couldn't come from a more respected source. Cheers.

I receive and sort the mail for the few offices in our building. So I collect all the rubber bands that have been used to secure the daily bundle. I keep them in a blue bowl. Sometimes when it's overfull we make rubber band balls.