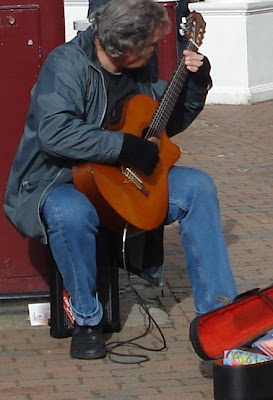 Slowly fermented dough is the best. Recently my bread-making has been too hurried, owing to impatience and allowing too little time for the leisurely and dignified process required. To hasten fermentation, I have been using too much yeast (nearly always brewers yeast, only in emergencies, instant yeast). Quick fermentation means a comparative blandness, over-dependence on salt for flavour, and sometimes can lead to the roof of the loaf collapsing in the oven. Bread made with too much yeast makes me think of someone arriving late for a meeting, clothes awry, bothered and wild-eyed.
The best bread is made with yeast accumulated and bred from the bloom on grapes or other fruit, or what is in the air. But that process alone can take up to ten days. As a rule I have a yeast-starter left over from the last loaf and refreshed daily with rye flour and a little extra water. Ideally, I leave three days before the next loaf is needed before step one, which is to make a "sponge", a soft, runny dough, using up to a quarter of the volume of flour. This will go into the batch for baking. It should be allowed to ferment merrily and be fed, if it looks like slowing down. It should be left for for 12 - 24 hours. You make the final batch with the "sponge" and the rest of the flour, plus water, fat and salt, and any other ingredients such as seeds or chopped olives for olive bread. With the natural yeast, the dough will take up to 24 hours to ferment. It should be allowed todouble in size in own time. A warm place will help it along, but a cool one will prolong the fermentation. And that is the point. Slow fermentation allows the flavour from the flour to develop, and, in the case of sour dough bread (where a benign acidity drawn from the grain infuses the dough), which is what I have been describing, it will do no harm.
Slow's the word. Flavour's the result. People say that bread-making (unless you have a bread-maker, a perfectly acceptable machine, but one which has it constraints) is time-consuming. What I try to remind myself is that the various stages put together take very little time in themselves. But for good bread, the stages should be spread over a good many hours. The result is a beautiful thing, indeed.

In the checkout queue at Sainsbury's this morning, a carton of blueberries topples from the conveyor on to the floor where it explodes, scattering the berries (a little like sheep- or rabbit-droppings) over the floor. " It just fell off," says the man behind me, as a girl quickly sweeps up the mess. "Squashed blueberries and new white trainers do not go well together," says the man, moving uneasily from foot to foot in his new white trainers.

Much of this process seems to consist of waiting but there are, I believe, incidental pleasures. Kneading, for one, though I always felt it was crucial to get the kneading surface at exactly the right height; the effort involved could otherwise lead to back-strain. The smell of baking bread is well-known but there is another, earth-mother smell during one of the interim stages. Mrs BB has made excellent bread from time to time but during and after the war my mother made it regularly such that we Phillistines thought it was a treat to have shop-bought bread. I particularly remember my mother's bowl: very thick terracotta (or something like it) with a ceramic yellow lining; its cross-section an isosceles trapezoid. Its bulk meant that it had to rest on the floor, risking back strain.

I always kneed a little to get the feel of the dough. But I use a food processor to avoid the full 20minute procedure, and I'd be a fool not to. Kneeding is good exercise and I can imagine that your mother's back must have suffered judging by the position of the bowl on the floor. In my account of slow bread-making, I omitted to mention the last stage before baking - proving. This simply involves knocking down the fermented and risen dough, and placing it in baking tins, where it is left for as long as is necessary to rise again.