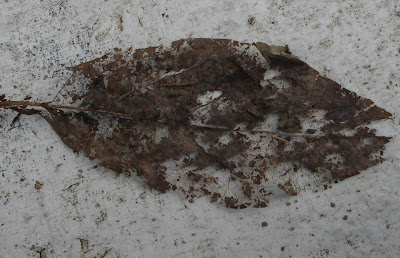 It's my belief, says the leaf that I have become a fish. I would swim away if I could.

Engraved in my thoughts is a particular scene in Episode 3 of the the first series of Wired. The leader of a drugs gang explains the game of chess in words belonging to a remorselessly violent, street culture. Even if you don't know the patois, and if you didn't know the rules of chess, you would effortlessly learn how the game works from the scene. And, more important, thanks to the triumphantly achieved dramatic device, you grasp in a new light the relationships within the narcotics squad and among the members of the gang that peddles narcotics . It is at this point, after two episodes, where I admit to having been confused by its take on reality, that I realize how Wired has earned a reputation as a great, perhaps the greatest tv series ever.

After the hard Winter almost all the leaves have dropped from the privet hedge. The result is that from the window of my study, I can see and identify people passing in the street. The transparency, which must go both ways, will not last for ever. As a rule I feel cut off from the world by the opaqueness of the hedge, but for a while, as I do today, I enjoy watching passers-by, never too frequent, but frequent enough to be interesting.

It's astonishing that one can become hooked on a TV series where 50% of the dialogue is either inaudible and/or incomprehensible. And that this obfuscation is intentional. As I mentioned we bought DVDs of the full five series and the main problem was restraining ourselves from gobbling up episide after episode into the small hours. One of the programme's great qualties is the way vague characters emerge from the murk and gradually become sharper and sharper. Not for the faint-hearted, though.

How wonderful- your leaf to fish poem words and imagery.

BB As previously discussed, sub-title are a very present help in time of trouble.

CC Thanks and greetings.

問題 Renewed greetings and thank you for your words which I hope are as kind as I think they might be.

I think you might find if you follow Two-Boxes line of blue dots some scantily clad oriental ladies will await your pleasure, they usually do.

The leafless hedge is perhaps rather like net curtains, or ambulance windows, you can see out of it but they can't see in, except come nightfall when your light indoors is stronger than the light without, and then the people outdoors cans see in.

That was a lot of words to state the bleedin obvious. I've never watched 'The Wire', but I like the fish.