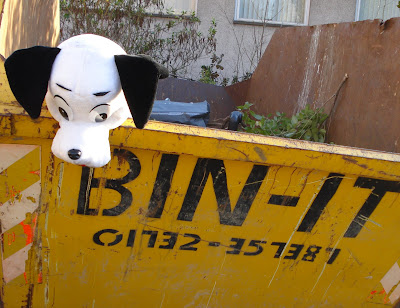 The dog in the skip, which I mentioned a few days ago has been rescued. I remark on this to one of the receptionists at the Doctors' Surgery which had discarded the dog. "Who saved the dog?"  "Must have been the RSPCA, " she says.

Outside a second hand bookshop in Cecil Court near Charing Cross, I find a heap of faded,  paper booklets called Tales for Little People. The original price on the cover is 1d.  They are about 100 years old. I cannot resist one called A Trip to Grammarland. It is the story of some dolls, one of which is called Heart's Darling. Heart's Darling is taken to Grammarland by a tiny winged creature called the verb To Love.
"...When she opened her eyes, she found herself in front of a large door with Grammar written on it. To Love rang a bell and the door was opened by an ugly giant.
"Heart's Darling screamed with fright, but the giant only grinned.
"Come in," said he, " and don't be frightened. I am the verb To Hate. You said you hated grammar so you have come to see me."
Among other characters are a lady called Subjunctive Mood and one called Conditional Mood. I am transfixed.

A large bed which I have just cleared awaits seed potatoes. At the moment I am chitting the potatoes - allowing them to sprout and rubbing away all but the strongest shoots. On Good Friday or thereabout they will be planted. Meanwhile,  the last four out of a pack of potatoes called Rooster bought from Sainsbury's for culinary use, having begun to sprout in the larder. They are particularly good, floury potatoes and I would not want them to be wasted. Instead I have put them in a bag called a potato bag with some compost. You load the bag with a layer of compost,  drop in the potatoes and cover them with more compost. When they begin to sprout, you add more compost. After about 12 weeks, I am promised a bag containing five or six pounds of potatoes. I can leave the bag in a corner of the garden where it takes up next to no room.
Posted by Unknown at 4:58 pm

I too am transfixed by your description of the child's book.

Dropping by here today I have re-learnt about 'chitting'. I had forgotten that my Grandad used to do this to his seed potatoes. So thankyou for evoking the memory

Are you absolutely sure the book was intended to be taken at face value? The ladies Subjunctive Mood and Conditional Mood seem wide open to double entendre. But never mind, the book has re-taught me something. I'd completely forgotten that verbs had moods and re-discovering this led me back to the dictionary and to the wider definition ("a distinct form or set of forms of a verb used to express whether the action or state it denotes is considered a fact, a possibility or a wish.") which has left me just as transfixed as you. Dreaming about the way language evolved into so many subtleties; wondering whether verb moods were created orally before they were codified (They seem such a "written" thing); celebrating yet again that point raised in Roupell Sttreet about how lucky we are to have English as our own train-set. Thank you, Hearts Darling - in itself a touching conceit which effortlessly avoids mawkishness.

I've been kind of bothered since you wrote about this as to whether the conditional can be said to be a mood. I understood that English verbs didn't really have moods, (but I suppose nobody's perfect...) because they are a function of languages which inflect the verb rather than just bolting things together with modals, and the conditional is rather a tense if it be anything, unless it use the subjunctive form of the verb which is a mood, but rare for to see, and worthy of note before it disappear altogether...

So anyway I resorted to Google which revealed it's all a lot more complicated and indeed interesting than I could have imagined what with some Uralic-Samoyedic languages having more than 10 different ones, and the fact that in German you can say both 'Johannes äße, wenn er hungrig wäre' and also 'Johannes würde essen, wenn er Hunger hätte'
which if I ever knew Ihad forgotten.

All of which would likely cause Heart's Darling to have an attack of the vapours. The 18th century grammarians had a lot to answer for when they tried to organise English as if it were Latin. Or as if it was.