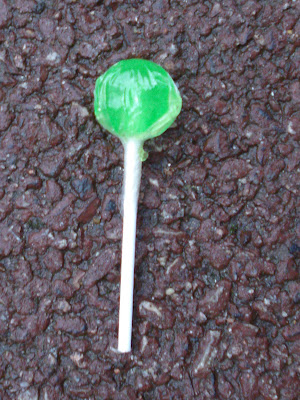 The end of a lollipop, abandoned on the road, is the cue for inclusion in my series of photographs of ephemera and detritus. To any one who is in doubt aboout where to go, the image says "go".

After lunch with an old friend at The Garrick Club, I wander back to Charring Cross via St Martin's Lane. There, I walk past a restaurant, perhaps better described as a cafe or snack bar, of vaguely Middle Eastern inclination, which I would visit from time, in the distant past, on my way home. It is still Middle Eastern in style - samosas, fallefal, hummous and the like, but it has a different name - Gaby's. As I pass it, I remember an enounter there, perhaps 30 years ago, which still fills me with a feeling of sadness. I was sitting in front of a cup of coffee, just about to leave to catch my train, when a middle aged couple joined me at my table. They explained that they had just arrived in London from Australia.  "We are looking forward to roast beef and Yorkshire pudding. It's our dream " they said, "on our first visit to England,"  and when a waiter arrived, they asked if they served it. I tried to explain that this was the last place in London where they might expect to find roast beef. The look of disappointment on their faces still haunts me. I had to catch my train. And wondered (as I still do now) if I was right in directing them to Simpson's-in-the-Strand, a few minutes walk away, where the tariff would have been disproportionate to that of the  cafe in which they had found themselves. I am still troubled, after all this time, by the culture shock which they and I, vicariously, had suffered.

Whitstable oysters and glass or two of Puligny Montrachet, 2002, Vincent Girodet, which I am still thinking about, - a treat for one who seldom ventures to London nowadays, to say nothing of the treat of talking about old times and present ambitions to an old and dear friend.

The Australian couple are probably home this very day regaling a neighbor, or grandson or plumber with how that pleasant English chap,
seeing their disappointment, gave them directions to that grande stereotypical English restaurant in the Strand. Where they gorged on rare roast beef and yorkshire pudding. ;-)

I hope and believe CC is right! The days of that kind of wide-eyed travel are perhaps gone, people are more sophisticated now and the world smaller. Disappointments may be fewer, but good surprises will be too.

'old times and present ambitions', is how it should be. May your in-tray always be full!

Did you have me in mind when you provided complete details of the Burgundy? Knowing I would ask if you didn't?

You say the Gaby incident occurred thirty years ago. If so it could have been a close-run thing for an entirely different denouement. Didn't Simpson's have an anti-woman rule which extended some time after the Middle Ages? If so the Australian couple could still be chewing over a memory which confirmed all their latent prejudices about Pom-dom and led to a decision never to come here again.