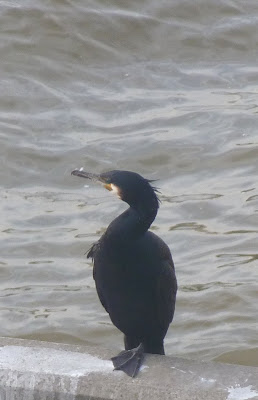 From Hungerford Bridge between the South Bank and Waterloo Station  I spot a cormorant.

Today in The Pantiles it is the first day of a food festival which seems to have merged with the regular Pantiles Farmers' Market. The sun combined with fruit and vegetables and cooking smells brings the people out to play. Groups stand around with paper plates and plastic forks and spoons scoffing. Or sit on the wall, drinks in hand. Dogs look hungrily up at them. The restaurant tables are packed with people who seem to be overflowing in their chairs, abundant, indulgent, conspicuous.

In the convenience store a man buys a can of beer. "May I have a bag?" he says. "I'll have to start charging  you for it," says the shopkeeper.  it seems the customer is a regular offender.  The shopkeeper hands over a small plastic bag, in its folded state no bigger than a pocket handkerchief. "There," says the customer, "I'll give you 5p, the same as Marks & Spencer."  He walks off leaving the 5p on the counter. Offended the shopkeeper ignores the coin, until as though tidying up,  he picks it up and does with it what shopkeepers do with coins.
Posted by Unknown at 4:49 pm

No Cormorants here so very interesting.
Your food fest observations have given me an idea for a new illustration sample. Lots
people, animals and scope for small narratives. Thanks!!