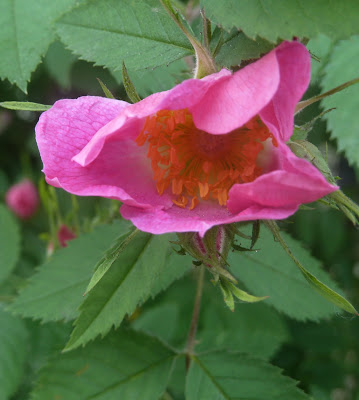 A wild rose. My rose book has numerous similar varieties, too many for me to allow me easily to  identify this one, which appears in the front garden of a house in Grosvenor Road. Many, despite being described as wild, are like this one, cultivated. On the whole I think prefer these simple flowers to confectioned damasks, flroribundas,  rugosas and  hybrid teas. A rose is really more than just a rose.

A hydrangea and an agapanthus both in pots have joined the other plants in our garden while some neighbours are on holiday. We have become plant-sitters. Or put another way their plants have become boarders.

In the Farmers' Market today I find French tarragon. "Finer than Russian tarragon," I say to the plants man."  "I grew some Russian tarragon once," he says and nobody wanted it." I have some Russian tarragon which grew from seed, and which lacks the flavour of the French variety. They are similar to look at and have similar Latin names. The Russian is called Artemesia dracunculoides, and the French Artemesia dracunculus. The Russian is hardier and more resilient.  There is a good recipe for roast chicken stuffed between the skin and the breast with a mixture of French tarragon and parsley amalgamated with creme fraiche and butter.
Posted by Unknown at 4:59 pm

Brave you, plant-sitting. I am death to plants, no matter how hard I try to be otherwise. The only things still growing where I have planted them are an invasive variety of mint, three clumps of chives and a rose bush which returns every year without blooms. As regards the latter, I keep hoping.

Your portrait of the wild rose is lovely. Its form reminds me of the wild yellow rose indigenous to the state of Texas (she of the song so titled). Its golden yellow petals and burnt red anthers were a feast for the eyes, but it was their scent (rose and cinnamon) that has kept them in my memory for over 55 years.

I think this is a cultivated variety of wild rose, unlike the Brier rose or true English wild rose, which is smaller and paler. I suspect that the yellow rose of Texas is also truly wild. I don't think I have ever seen one. But I have heard it.