Bread, wormhole and the sadness of things 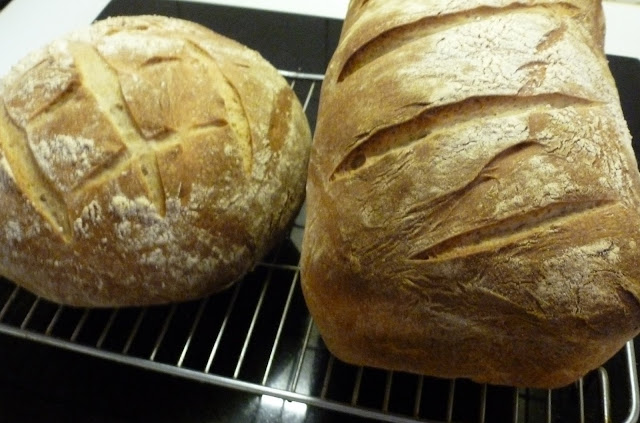 A batch of sour dough bread. I am using proving baskets to allow the dough to prove in different shapes rising from the baking tray rather than in a baking tin. The basket is removed for baking and exposing the bread and enhancing the crust.

Tom, having difficulty with my comment box, emails me  about the cloud photograph which I posted a couple of days back. It reminds him of  some clouds he had seen from a  third floor window in which a gap appeared like another  window opening into a different world. His memory in turn  recalls one of mine where on my regular route home on the M25 just after sunset a bank of cloud, opaque and purple in colour, filled the sky to the right. So dark and solid was it that I began to be convinced that it was a mountainside. The lights of cars driving in the opposite direction seemed to be traffic on a road skirting  its slopes.  I had the feeling that I had driven through a wormhole into another universe. Even now I still wonder if I had.

This morning I wake with the words "the sadness of things" on my mind. It is the title of a  haunting song by the singer songwriter Momus, but it seems to me to refer to  a more remote quotation. I cannot trace it. For some reason I think of some  Latin words, but their source eludes me. Things are sad though, collections of things separated perhaps from their owner, perhaps of no further use to him. It occurs to me though that in the sadness of  things, a vestige of pleasure, of former happiness resides, leaving in place of sadness an aura of melancholy.
Posted by Unknown at 6:29 pm

That bread really does look delicious. I'm so glad my memory of clouds triggered one of your own memories. Clouds are such magical, magnificent, awe-inspiring products of nature.

As you can see, I have a comment box back - at least for now!

The only words which I remember about sadness of things are Virgil's: Lacrimae rerum sunt. Literally "There are tears in things".

Lucas The very quote that was eluding me. Thank you.

Tom Glad the comment box turned up. Have you seen the work of the "sculptor" - I can't remember his name - who creates miniature clouds indoors, in galleries for example? They don't last for long but they look like real clouds.