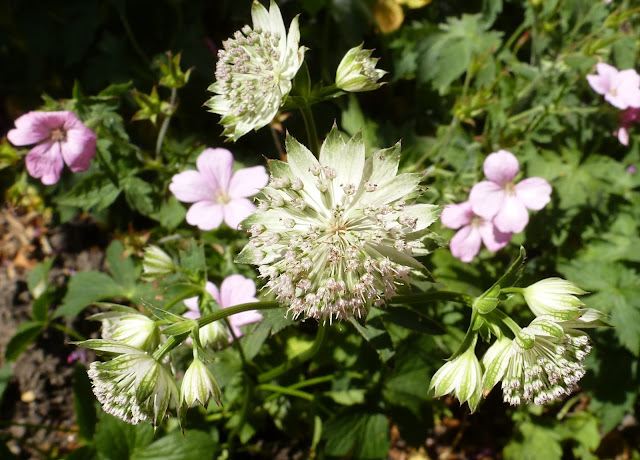 Astrantia is a newcomer to our garden. It is an annual which seeds itself if given the chance. Monty Don, the  TV gardening  presenter recommends leaving a seed tray beneath it in  Autumn,  and allowing the seeds to settle in it.  Set the tray aside in the greenhouse and in the Spring seedlings should appear. I find that to grow and nurture a plant helps you to love and understand it.

A box, yes a box, of rosé wine yesterday comes to our house via a neighbour who can't chill it for want of space in his fridge. It fits our fridge so we have the problem of getting through 5 litres of the stuff. That's the equivalent of six bottles. The friends comes to lunch and  between us we get through two of the bottles.They take away another transferred to an old Evian bottle (water into wine) leaving us with roughly three more. An odd sort of cow this box. It contains a plastic membrane from which emerges a self-sealing spout, like the tube through which you inflate a balloon. To milk the cow you hold a glass or bottle under the spout, press a lever integral with the spout and out comes a stream of wine. The wine which our neighbours have stored for a couple of years is remarkably fresh,  and probably less oxidised than it would have been if it had lain in a bottle with a cork. The wine comes from Bergerac.

"Take fifty kernels of peach stones and a hundred of the kernels of cherry stones, a handful of elder flowers, fresh or dried, and three pints of muscatel. Set them in a close pot in a bed or horse dung for 10 days, after which distill in a glass with a gentle fire and keep it for use." It is a remedy for bronchitis, whooping cough and ordinary cough.  The recipe comes from the great herbalist Hilda Leyel. It  could be useful for anyone with a surplus of peach and cherry stones.

A wine box - in fact a flexible plastic envelope rather akin to the bag in a bagpipes - is designed for one-way traffic. As the wine is drawn out the envelope collapses, thus preventing a vacuum from forming inside (which would inhibit the outflow of wine) while simultaneously preventing the inflow of air. Obviously such a mass-produced device is not entirely hermetic but it's good enough for several days. I can speak with authority about wine-boxes; rosé is consumed in shame-making daily quantities during our Languedoc holidays. I buy in bottles because of the wider choice but the younger end of the family buys in bulk to meet their even more insatiable needs. From time to time I try a glass of box wine and you're right, there's not a hint of oxidation. But then even five litres of the stuff don't hang around. I believe there's an even larger box than 5 l and it's this kind of logistical problem that causes us to search out villas which have two fridges.

I first came across these in the 80s I think. They were designed originally in Australia at a time when that country was begininng to produce wine on a serious basis - quality as well as quanitity. The boxes helped with the quantity. They were suspect rather for the quality of their content than for their reliability. Until the other day I did not realise that they were still as your experience in France confirms widely in use.