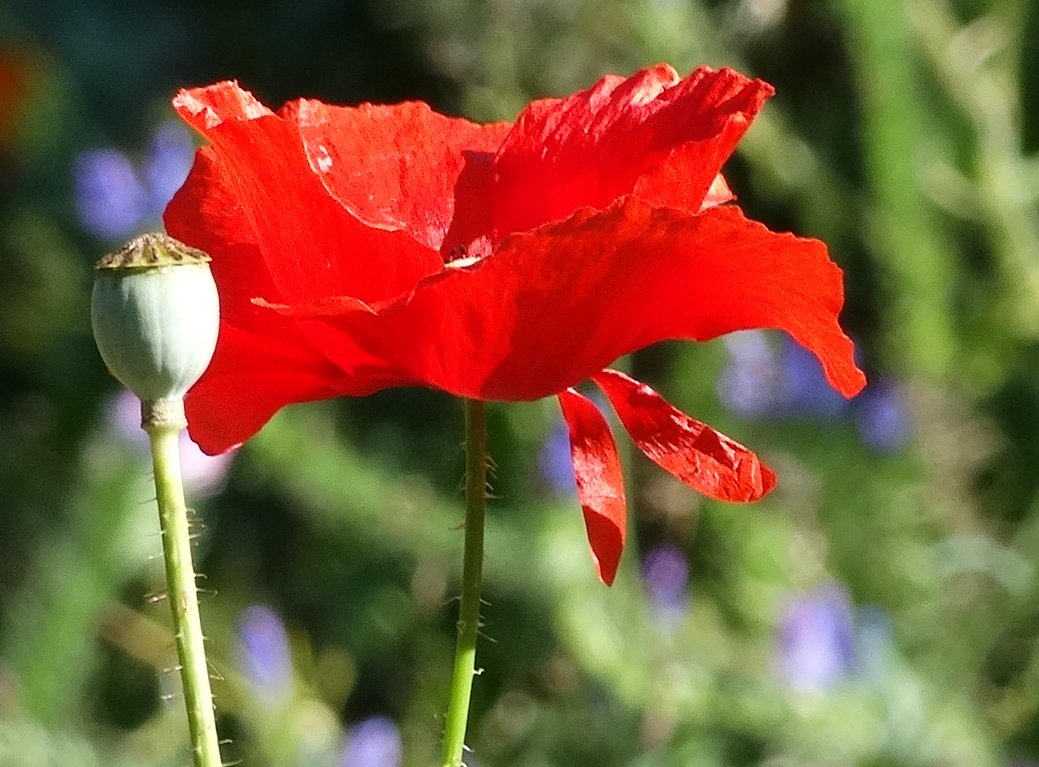 Poppies have been flowering throughout the summer among the bands of bee-attracting plants on the edge of the vegetable garden.

Flossies ice cream parlour has acquired a tricycle with a refrigerated container in front. It carries the legend  "Stop me and buy one". It reminds me of such devices  which were around when I was a child.  Today, among the ice creams displayed  in wells when the lid is opened is one of  bright and sinister blue colour. "It's bubble gum flavour," says the vendeuse. "The kids love it."
My memory when my parents stopped the car to buy one  from the Walls Ice cream  tricycle on the way to Eastbourne about 76 years ago  is of tubs, cornets, choc ices and triangular water ices. But no bubble gum.
Had their been cornets of blue ice cream available I would have shunned it, I know. Another memory of the time is of a box of chocolates which I had been given, and which I was allowed to broach once a day. Among the chocolates were violet creams. If I was unlucky enough to bite into one of these, it went straight out of the window for I was convinced that chocolates of such  a colour must be poisonous and planted there by an evil fairy. The chocolates which my Mother discovered when weeding the rose beds  under the window of my room were hard to explain.

Although we are officially into Autumn high summer still prevails. Leaves remain green and the flowers are abuzz with bees.  So  the advertisements  in Sunday newspaper for tulip and daffodil bulbs seem out of order: small children experimenting with their mothers' make-up.

Blue is an alien booze colour too. Oddbins had discounted a bottle of blue Curacao to the point where I couldn't resist it but it was a great disappointment. The taste was merely sugary. We were into cocktails that year and I added it to various mixtures but it tended to evoke a distant ancestry with meths. Tired of experimenting I returned it to the booze cabinet where it lingered for a year or two. When I finally retrieved it the liquid had become a blue jelly, suggesting that it never was booze anyway. Not even fit for bubblegum.

When I had an allotment in Sevenoaks some years ago the plot was adjacent to a Victorian rubbish heap. In pursuit of burried treasure my son Toby came to help. What he found most of was old bottles. Many made of blue glass were used by pharmacists to indicate a poisonous content.