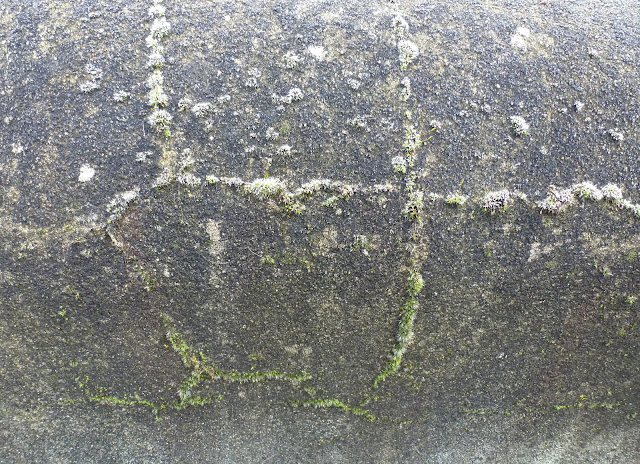 Frosted lichen draws on walls. The camera looking close explores new horizons. What do they signify?

Winter is good time to work on my scrap book of random images randomly arranged. The driving force behind it is to include pictures, logos, drawings, photographs, labels and the like which appeal to me, and which I would like to see again. And which entertain, once pasted into position, with unlikely contrasts in style, subject matter and scale with neighbouring images. There are few rules on subject matter. Animals predominate because I like animals.
One notable scarcity in the book so far is sporting photos. Surprising because the quality of  football, tennis, cricket and other photographs as they appear in magazines and newspapers is so high. What I don't like is the way sportsmen and sportswomen appear on camera. Ugly expressions of triumph, mouths gaping in mid-bellow, fists pumping the air, are not for me.
There are exceptions. There is one cut-out of Kevin Petersen, bat above his head, concluding a cover drive, a classic of style and power. And today I find one of  Maria Sharapova, following through after striking the ball during a serve.   As she leans forward , her weight  is on her left foot, her racket swinging past her left thigh. Her right foot has risen behind her,to shoulder level. Her hair flies out  behind her head. Her mouth is open as it emits the piercing scream that accompanies every stroke. Not my favourite sporting personality but a photograph for our times.

Ice is still treacherous on the pavement under the melting snow and slush. But the branches of trees and gutters are beginning to release large drops which explode as they land with a monotonous plopping sound.

I agree that the pictures of sports heroes are caught at the moment of adrenalin high extrovert triumph. I saw a picture of Raphael Nadal taken the day before a tournament started, just sitting on a bench and looking round in a relaxed way. You had to look really hard to recognize just who this fellow was. The one of Petersen sounds good.