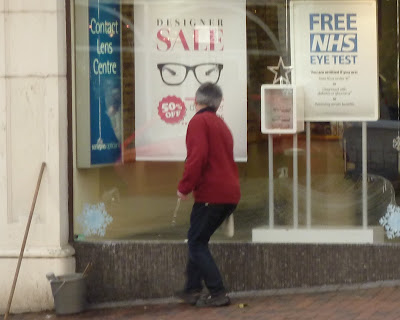 The window cleaner seems to dance as he wipes away the suds from the opticians window. 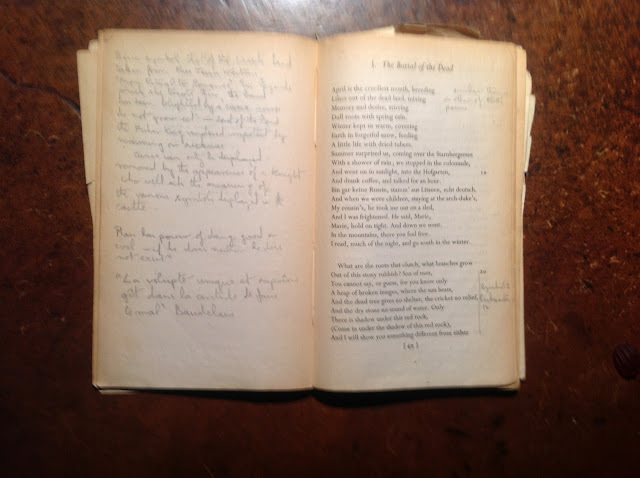 When I was at school I first learnt about T. S Eliot from fellow students rather than from teachers. Modern poetry as taught was Rupert Brooke, John Masefield, Walter de la Mare. That dates me I know. But it hadn't discouraged me from reading The Wasteland. This is the Penguin edition of Eliot's Selected Poems,  which I bought at the time for 1s 6d. It contained  among other poems which I grew to love The Love Song of J Alfred Prufrock. But it was the poet's 1922 masterpiece that I found most difficult and  was determined to fathom. Here is the opening page with my pencilled notes on the blank page facing (the source of which I cannot remember). So it was revealed to me how Eliot fed into the poem strands of his reading from Jessie Weston's From Ritual to Romance to The Book of Ecclesiastes; from Wagner's Tristan and Isolde to Dante's Inferno; from Virgil to Baudelaire. Today, more than 60 years later I acquire an app on The Wasteland which includes: the text of the poem, a facsimile of the manuscript with Ezra Pound's suggested changes, Eliot himself reading the poem, a performance of it by the actress Fiona Shaw and some notes more precise and detailed than I ever had access to. I count myself lucky, oh so lucky to live at a time when technology opens doors the existence of which we never dreamt of in those bleak post-World War 2 years.

As I walk past wheelie-bins bursting with cast-off wrapping paper and card boxes which once contained  the books and clothes, gadgets and toys lavished a couple of days ago as presents, I find myself thinking about returning  to a simple existence where basic things matter and give pleasure enough. How hypocritical or at least inconsistent that I, of all people, who revel in gadgets, apps and DVDs, and consume away with the best and most accomplished of consumers, should  have allowed such a thought to creep into my plump and greedy soul! But creep in it did, and I feel the need to record it.
Posted by Unknown at 5:20 pm

Where once we were cautioned about not seeing the wood for the trees, now we must remind ourselves that the technology is not an end in itself but merely a means. I do not have an I-phone but during conversation at Christmas and New Year's Eve others used theirs to fill in what I said with additions, elaborations and compensations for forgetfulness that made me seem more encyclopedic, more brilliant - these arrivals of information occurring at conversation speed.

And at one point Ysabelle's partner, Daniel, who spent New Year with us while Y spent it with her father in Santa Lucia, commandeered my Hewlett Packards netbook (bought by me for a little light word processing en route to Paddington or while on holiday in France) and used it for all sorts of Internet acrobatics as background to what we were discussing. Notably, arranging details of our forthcoming Languedoc holiday, still five months distant.

These developments tend to be obscured by the fact that huge numbers of people use the technology for watching soccer and downloading avalanches of pop and it is such activities that catch the eye of TV and other public media. Whereas you are able to show us the annotated Wasteland following a decision taken less than half an hour beforehand. Just imagine trying to duplicate this transfer of information (and emotion) with the means at your disposal thirty years ago. Photographing the Penguin and waiting for the prints, writing the letter, finding a stamp. Because we must admit that the immediacy adds to the effect - most poignant in this instance - of being taken back (via the presence of physical evidence) fifty years and allowed to share the moments of a discovery that shaped your life. A transaction that has so little to do with the majority of these transactions and yet has everything to do with them. For both forms rely on access to a Time Machine.

All of which tends to obscure the thing you have revealed. Not least the handwriting which carries only the faintest of hints of the jaggedness that was yet to some - and is yet another aspect of the Time Machine. Finally there is the Eliot itself. When you urge me (in the gentlest of terms) to expose myself to the attractions of poetry, and I respond by saying I know nothing of it, it is Eliot who floats like a cloud of misunderstanding between us. For I lie, of course, and you well know it. I have read the Wasteland and am aware of the Quartets. They are the things by which the abstraction of poetry becomes poetry itself. Not only have I read the words but I have been impressed by them. Without having the faintest knowledge of how Ecclesiastes and Dante fit in. Without understanding more than 20% of what I have read and without - for shame - wanting to attach levers to that final 80%. I have, as I say "read the words" and occasionally they have cohered into beautiful arrangements beyond which I can say nothing. Let me break off and find one such example which, I hope, is slightly off the beaten track though so little is:

A glare that is blindness in the early afternoon.
And glow more intense than blaze of branch, or brazier,
Stirs the dumb spirit: no wind, but pentecostal fire
In the dark time of the year.

But the key assertion here is "beyond which I can say nothing". What's the point? And here I must break off for good. A comparatively casual manipulation of the Time Machine at your end has sent me into futile scurries at this end. Creating some kind of defence which, if complete, would take many more words and would be of interest only to me. Except that both us should reflect (actually you've already done so much more concisely in your post) that the Time Machine exists and that it's far from powerless.

I enjoyed and appreciated your full response. The times certainly are a changing. It seems that we are on a train that has gathered so much speed that that we can make out nothing of the landscape through which we are passing. I find myself longing for it to slow down but at the same time I am not beyond gasping with pleasure at arriving so quickly at destinations undreamed of.

The thing is that unaided by technology I tracked down the opening lines of Little Gidding which you so quote with such pertinence. We can still fortunately do without electronics. It doesn't have to hang round our necks all the time. We must use it discretely and if to quote from the last part of the same poem, we can arrive at some thing as fundemental and right as this. we are saved from its worst abuses.

"...and every phrase and every sentence that is right (where every word is at home,
Taking its place to support the others,
The word neither diffident nor ostentatious,
An easy commerce of the old and new,
The common word exact without vulgarity,
The formal word precise but not pedantic,
The complete consort dancing together)..."

My preference incidently is always for the Four Quartets in comparison withThe Wasteland.