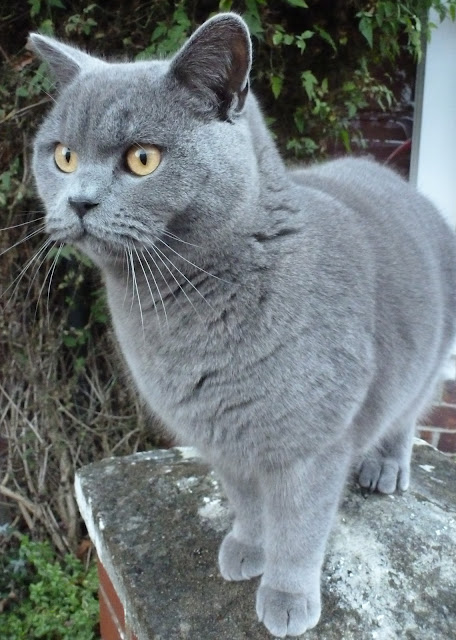 Not the first time this cat distinguished by its round face has posed for me. Who could resist another snap.

Last Saturday  I posted  an account of the conversation  I overheard between  two men of military appearance talking in Sainsbury's (in the biscuit aisle as it happened). Robbie commented on the "awful pregnancy" of the last words in the dialogue, and said that he was nevertheless tempted to suggest a conclusion of his own. I have since referred to my notebook and find that I omitted the final words which one of the men said to the other on parting. These were "Thanks for recognising me." I decided to leave these out because having missed the early part of the conversation I was unable to find a likely reason for his gratitude.

Morrison's is the smaller and the closer of the two supermarkets within walking distance of where I live, Sainsbury's the larger and  more distant.   Frequenting these emporiums over the years you  tend to build up a sort of relationship with check out operators. They know your foibles and you know their enforced small talk and formulaic greetings.  Some are better at small talk than others. Some introduce a personal wit of their own making. Others rely entirely on tired and predictable formulas.
Now I have a new relationship;  this time with the self checkout machines. I am a little shy to begin with, not wanting to give the wrong impression. Too much self-confidence and they can get nasty. "Simply be yourself ", I say to myself.
Today I come a cropper. I deposit one red pepper on the viewing platform. "Red pepper" says the screen. Number? asks the screen. One, I indicate, touching the screen with my finger. But did it register?  Perhaps I didn't tap hard enough. Try again. I tap again and for good measure once more. To my surprise I find that my purchases have so far cost me £119 .03p.  Aphorism for our times. Tap 1 too often and it quickly becomes 111.
Posted by Unknown at 5:25 pm