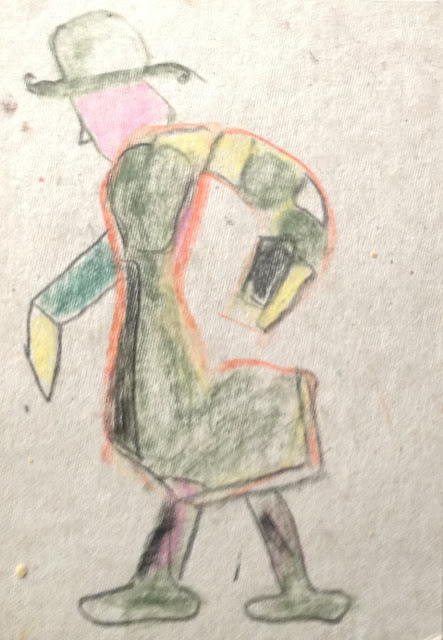 Today's doodle occurs because I don't want to throw away the rough cardboard backing to a notepad which I am about to discard. I like its rough texture.


Yesterday I asked for the connection between the fifth century BC Greek poet Anacreon , sometimes described as the poet of food, wine and harmony, and the inauguration ceremony this week of President  Barak Obama. in his second term of office.
It was to Anacreon that a poem by Ralph Tomlinson was dedicated in the 18th Century England. Tomlinson was a member of the  Anacrontic Society, a gentleman's club whose members wished to promote music and its performance. His poem was set to music by John Stafford Smith  a member of the Society and became a popular drinking song in Britain and America. By now you will have guessed that it was this tune - ranging through one and a half octaves and difficult to sing, certainly for the likes of me - that was eventually adopted to fit the words of a poem by the American Francis Scott Key after witnessing the bombardment by British Navy Ships of  Fort McHenry in Chesapeake Bay in 1814. The refrain goes,
"Oh say does that star-spangled banner yet wave
O'er the land of the free and the home of the brave".

Outside Morrison's supermarket a Labrador waits patiently, a green tennis ball beside its paws. A talisman, a toy, a token that its owner will sooner or later return.

"And the rockets' red glare" was to prove prophetic.