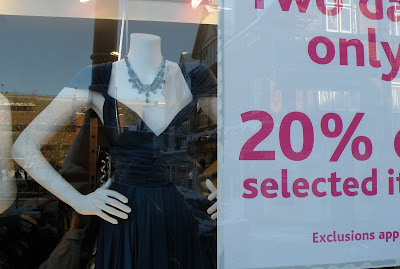 Season of sales and drastic reductions
Close-bosom friend of declining profits...
.
I hear the poet Frieda Hughes - daughter of Ted Hughes and Sylvia Plath - interviewed on the radio. She says that she used not to read her parents' poetry because she wanted first to develop her own style and literary identity. One day on the London Underground she saw facing her seat, one of the short poems in the series Poems on the Underground - poems designed to help passengers pass the time, in place of the usual advertisements. The poem was entitled Full Moon and Little Frieda. It was by her father, Ted Hughes, and she had never read it before. She tells the interviewer that she wanted to nudge the person in the seat next to her and say: "See that poem. It's about me."
.
In the rain, past a dripping shrubbery, I make my way to the kitchen garden for the first time for several days. In the street, the pavements and tarmac are greasy and unattractive, but here the earth exudes moisture and the leeks, some of which I have come to lift for tonight's meal, though a little flattened by the recent snow, give me a generous, aromatic welcome.
Posted by Unknown at 3:47 pm

Long, long before I became entangled in versifying, when I probably thought that poetry was not "manly", I too used to read the poems on the tube. Furtively I'd look around to see whether anyone else was doing so.

I was less covert in reading tube ads promulgated by the Wool Council, or some such, incorporating doggerel which ended with the line "There is no substitute for wool". In one of these verses the punchline had been translated into French.

What a wonderful story about father and daughter! Frieda's response also is cool and excellent.
Happy New Year to you and Heidi!

Poetry, leeks and the scent of damp earth...Thankyou.