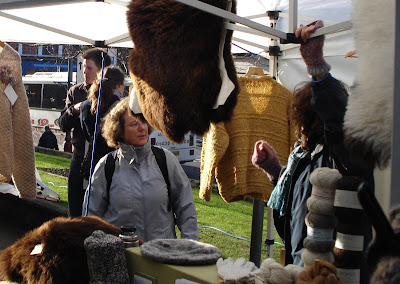 Wool and fleeces at the Farmers' Market.
.
Jeff Wild who lives in Switzerland commented on my chance meeting and three minute conversation with the Shakespeare scholar and editor John Russell Brown the other day.He knew who I was talking about. How lucky I was he says to have met him like that. Lucky too to live in an age when people can so easily communicate from different corners of the Earth on matters of common interest. The global village, once forecast as a miraculous means of intercourse for the human race as a whole is coming to pass. The encounter meanwhile has reminded me of the rule formulated by the mother of my first wife, which I have not forgotten: if you want a conversation on a train, strike it up as you sit down. If I had managed to do that on this occasion, our conversation would have lasted the best part of an hour instead of three minutes. Unless of course, as it is quite possible, Mr Russell Brown grew tired of my naive observations and returned to the manuscript he was correcting.
.
It starts to snow as it is getting dark. In Calverley Place the shop windows are lit. The snow settles. Shoppers say the same thing: It's quite like a Christmas card. Cold though and wet when the thin flakes melt on your neck.
Posted by Unknown at 12:41 pm

Well, these thoughts are not naive, not by any measure. I do see the force of the rule your wife's mother formulated, though. I would be more disposed to talk to someone who spoke as he sat down - even if I did have a MS to correct. Why should that be, I wonder?