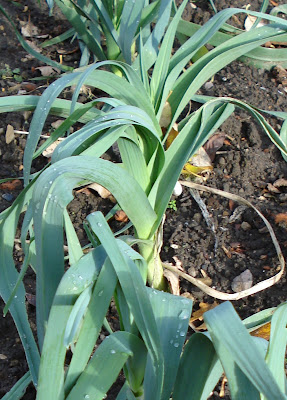 Leeks stand, waiting to be lifted through the winter - a thrifty and delightful vegetable. Only when the ground freezes solid, rare nowadays, do they become inaccessible. I like to stew the stems slowly in a mixture of olive oil and lemon. You can eat them this way hot or cold.
I believe the method is called A la greque.
.
Josh's If only I could ... poem , which I quoted the other day, attracted the attention of Alison Wormald. She comments on my post to Josh's pleasure and to mine. She says that she would like to read the whole poem. So, as it is not very long, I have posted it in full in the comment window of the original December 11 post. Among the many things I like about the poem is its rugby image - poetry is rarely, perhaps too rarely, associated with rugby. So good on you Josh, and goodbye to any foolish idea that sport and poetry do not go together.
.
Perhaps the first day of frost this winter. You can tell without looking because you can hear the rime being scraped from car windows. Then all day, the rime lies in hollows and shady places in The Grove and on lawns. Birds are more in evidence than usual . The cold seems to slow their movements and they appear less shy than normal. I count no fewer than seven black birds in a rowan tree, attacking the berries
Posted by Unknown at 2:01 pm

Thanks for sharing it in full, Joe. Seems your grandson has inherited your poet's genes!

Marja-Leena has said it best, I think. Poetry is a valuable gift to pass along, both the writing of it and the love of it.