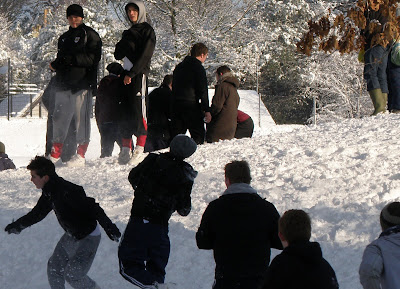 Calverley Ground after last night's snow.
.
"He's got peas on his knees," said my sister-in-law when I ring to speak to my brother. Confronted by my incomprehension, she says that he is lying down nursing his knees with bags of frozen garden peas. "An old football injury," she explains, "is troubling him. The peas are helping." I hope so.
.
In The Grove this morning, a woman stands guard over a wigwam shaped igloo. "My sons made it this morning," she says. "They made a big snow ball and hollowed out the middle. They were up at 5 o'clock this morning." This morning I wake early too and, mesmerised by the big, beautiful silence and the white light leaking through the shutters, want to be up and about taking photographs, sampling the depth of the snow. Making an igloo doesn't occur to me, but I can understand their enthusiasm. "It's perfect snow for skiing," says Caroline, who is staying with us. "She lives in Munich and skis regularly, cross country as well as on the slopes. She knows her snow. The snow, so rare for us nowadays, is overwhelming. It has brought everything to a halt. Peace and silence reigns.
Posted by Unknown at 12:47 pm

Oh, how lovely to have snow, despite the inconveniences! I keep looking my last winter's photos of our record snowfall, missing it's beauty. I'm looking forward to seeing yours. Enjoy!

We are supposed to get our snow tonight into tomorrow. I can't wait. It shuts the city down.
Everything becomes white and quiet. A really good blizzard brings cross country skiers into the streets. Especially nice for the holidays.

We have snow this morning and it is lovely. I love the hush to the world, muffled car sounds, giggling kids and cheerfully barking dogs - prelude to the holidays. Even the wind chimes sound subdued.

I'm going to watch it from inside while enjoying a pot of tea.

Thanks all. I will enjoy the snow. The streets are like an ice rink to day which is an added thrill, if hazardous.
Crow: I have tried twice to reach your blog to see how you are but have been denied access using my regular Google password and email address.

Please check again, Joe. I was trying to cure a problem, an unpleasant situation, but I think the cure is becoming worse than the disease.