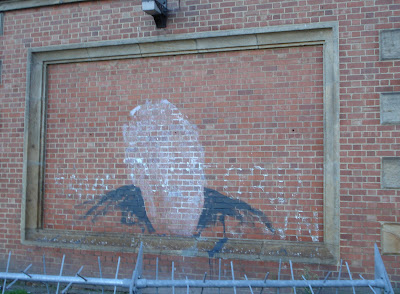 This strange image appears on the wall of one of the towers supporting Charing Cross railway bridge. It seems to have several levels of significance. At one it is an angel; at a another a human crow. I like the way it seems to be escaping from the frame provided by the architects of the bridge, and pondering the spikes erected by those who want to protect the bridge from marauders.
.
In Oxford Street, the brakes of the bus on which we are travelling scream and groan as though driven mad by pedestrians and shop windows. They remind me of the agonised wailing of the hydraulic bin lifting device on the Council rubbish removal vehicle which was at work outside our house as we left home this morning. The Christmas lights,which come on in the early afternoon in Oxford Street and Regent Street, do little, this afternoon, to relieve the apparent pain suffered by the machines which labour without thought or reward.
.
It is difficult, but satisfying to walk cross the road at traffic lights slowly and with dignity to the sound of the impatient bleeping which is supposed to hurry pedestrians on. I feel sorry for people, older and even less agile than I, who hobble across the road as though whipped by the insidious bleeps, their sticks trembling and tapping in front them. In response to the bleeps I walk twice as slowly as I normally would, and smile at the drivers crouched like jockeys over their steering wheels.
Posted by Unknown at 10:37 am

I smile at how familiar the pictures you convey are to me now, especially the last. I don't think I quite yet got used to those mad crosswalks in London, and I'm not that old yet!

I was quite shocked to hear about the harrassing drivers. It wasn't always so.

The image reminds me of the frescos and other church art that were, literally, defaced by Cromwell's soldiers. Always deeply unsettling to see a blank where a face ought to be.

hi
i have taken that photograph on the southbank. before the face got scrubbed off it was a picture of Stevie Wonder, not quite as imaginative as your intpretation love
granddaughter

Hi, anonymous grand daughter Jet! Intersting cooincidence. Have you got the Stevie Wonder original? I would love to see it. Hope to see you soon!

Lucy: Blank faces are sinister. Like the clock without hands in Wild Strawberries

M-L I remember when those bleeps were introduced. I was quite young and spry at the time and I thought then how cruel those rapid bleeps were for old people crossing the road at a pace markedly different from the rapidity of the bleeps.

when i rule the universe, pedestrian crossings will play "moonlight serenade" and "the dance of the sugar plum fairy"

actually it was anonymous ganddaughter, giselle!
love
anonymous daughther... a slightly easier one to work out!

Sorry, Giselle.Sorry Jet. Too many talented grand daughters it seems. But wonderful for me to have such a following.