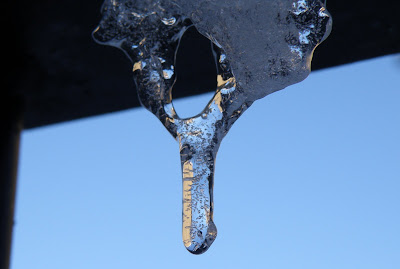 Suspense.
.
Every year the same Christmas photographs appear. The people are the same. But a whole year has passed. As I become older I notice more than I used to, the changes in the few photographs of me which get through - a certain shrinking of the features, a wariness about the glance. Perhaps this is due to the stress of getting into place, while the delayed release switch on the camera is in operation, and the machine is bleeping like pedestrian traffic lights urging you to cross the road quickly to make way for road traffic. But I know that in fact the years are chipping away at the face I have got used to. The consolation, and one that I am truly glad of, is that I am still here to look it in the eye.
.
In his film Encounters at the Edge of the World, Werner Herzog photographs and interviews people who live and work in the Antarctic, and shows astonishingly beautiful scenes beneath as well as above the ice. He tells us at the beginning of the film that this is not another another film about penguins, but later there is a brief and forlorn penguin episode which I can't get out of my head. He films a group of penguins following an annual migration route to the sea. Off they go in single file like pilgrims, except for one penguin who turns round and makes its solitary way inland towards a frozen, mountainous waste on the horizon. Some internal mechanism has gone wrong and we see the lone bird battling on through the wilderness, impelled by a perverse and faulty, inner vision, on its way, Herzog says, to certain death. The image, I think to myself, says something about courage, a blind and misguided courage (not beyond comparison with human courage) which I find noble and sad, but which I do not wholly understand.
Posted by Unknown at 2:14 pm

The situation involving the lone penguin, when transferred to humans, is frequently misunderstood. Some people imagine that when a racing driver like Michael Schumacher retires he does so with a sense a relief, happy to be free from his dangerous line of business. Often such people are happy on his behalf. And so when, at 41, he decides to return to the race-track (He will race for the championship winning Brawn team, to be renamed Mercedes) they feel betrayed, as if he had lost control of his mind. But then this inclination existed for many years and is merely being re-assumed. This is a very obvious example of why it is always dangerous to imagine one can pretend to understand any other human being. Or penguin, for that matter.

A touch of introspective melancholy here after the Christmas expansiveness. And behold, the comment verification is 'sadmomes', which is almost 'sad moments'.

You are very dear, dear Joe.

I wonder if all migrating birds have occasional eccentrics that do that, but only with penguins, being earth-bound, is it visiblae to the human eye...

I love the photo, what an interesting icicle.