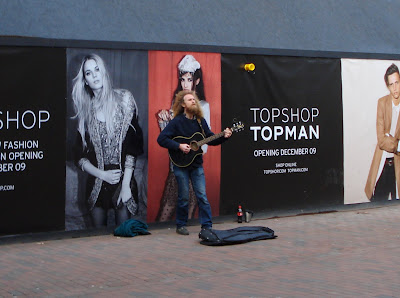 In Calverley Precinct outside what used to be Woolworth's.
.
For those sensitive to what's going on in the world, it is important to be able recognise a perfume, if not always to appreciate it. As Sherlock Holmes points out in the Hound of the Baskervilles, having identified a woman by the smell of her notepaper, "there are seventy-five perfumes that a criminal expert should be able to distinguish from one another". Nowadays there are a lot more than 75. A book called Perfumes An A -Z Guide, which came into our house recently, to say nothing of their range and qualities, lists and vividly describes no fewer than 1,800. Its authors, Luca Turing and Tania Sanchez, have produced a work which Sherlock Holmes could only have regarded as a key reference. There is everything here that he would need to know about the structure and nature of fragrances. For the beginner, like me, it is nice to learn that these materials are found in almost every composition: "molecules that smell of rose, violets, jasmine, wood, patchouli, sandlewood, vanilla, and musk. Some - such as vetiver, tree moss, violet-leaf compounds, isoquinolines, aldehydes, or birch tar - mostly belong to certain genres." As far as I am concerned the names of these building blocks of fragrance are enough to make me want to read on and on.
.
In the Smith's the greengrocer, I pick up an apple of supreme elegance, colour and size. It is perfectly shaped and almost as big as a melon. It is called a Howgate Wonder, an old and now rare variety. I take it, with my other purchases, to the cash desk, and as it is about to be charged to my bill, I go to the display and pick up another, to keep the first one company and because I love the look of them.
Posted by Unknown at 10:18 am

"which came into our house recently" adds piquancy (possibly undeserved) to this little review. I start reviewing the agencies of transportation but decide they're never going to make such a seductive list as yours and stop, abruptly, at "roller conveyor". Are private jokes allowed?

Have you read Perfume: the story of a murderer by Patrick Suskind? If not, you may be interested in what I wrote about it.

BB Came into just seemed a quick way of passing over the unimportant details of why and how. Roller conveyors and other private jokes are of course welcome.

M-L Yes, I have. In my wine writing days I once had to meet a French winemaker in a Chinese restaurant in London. He arrived at the table his nose twitching in a somewhat feline way, and greeted me with the one word "ginger". I was immediately reminded of the sinister hero of Perfume and his sense of smell which Suskind equates with perfect pitch.

Looks like a nice book to read about from A-Z perfumes. :)
human pheromones