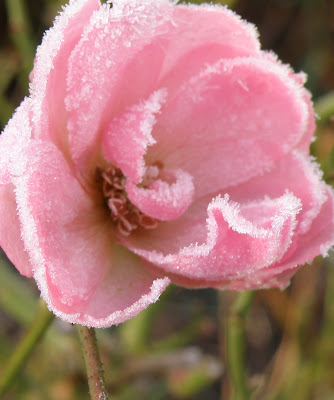 Frosted rose.
.
In the Nepalese restaurant called Mooli a dish called Seku wa Barbat consists of tender pieces of boneless lamb "with" the menu says, "a kiss of spice".
.
While listening to the traditional carol service from Kings College Cambridge on BBC Radio 4, I roll out pastry for mince pies, make circles of the pastry with the rim of a wine glass, spoon mincemeat into the tarts and cover the filling with more disks of pastry, which I glaze with an egg and milk glaze, pierce with a cross to let the steam escape. The music and the readings from the gospels help concentration and inspire a sense of the appropriate, if not the eternal. Christmas cards are displayed in a suitable places all over the house, and, by the front door in the hall, hangs a bunch of pagan mistletoe . A turkey awaits the usual services in the cold cupboard which, when this house was young, used to be a coal hole. I am momentarily troubled by the feeling that I am engaged in a sentimental charade, and that maybe the feelings of goodwill and kindness that surge in my foggy brain are ersatz emotions picked up from habit and brainwashing.
Then, to quote my friend Anna, who on such occasions would probably say "Pish!" to such negative thouhgts, I say "Pish". And a happy Christmas to all who step by and visit this site, and who are kind enough to say hello from time to time, and whom I have come to regard as good and dear friends. A few years ago, I would never have thought that such links could be made with people of like mind and interests living in the USA, Australia, India, France, the West of England, the North of Engand , Tunbridge Wells even, and who knows where else. This is a good time, despite all the attendant horrors, to be alive. To all of you I raise a virtual glass and wish that it were a real one poured for you: A happy New Year!
Posted by Unknown at 3:26 pm

i'm determined to rush from the keyboard to the kitchen and remove the stopper from a very large beer bottle so that i can drink to you right now !

Sounds like you are celebrating Christmas most happily despite the touch of humbug that you'd like to aspire to, Joe! Fred and I wish you and Heidi a warm, plentiful and happy Christmas with all the best in the New Year! Indeed, blogging has rewarded us with some wonderful friendships around the world (you forgot Canada :-))

I lift a cup of Assam to you all.

The crystal edged rose is fairy-land beautiful - frosting on the cake.

Your friend Anna is correct, of course. You wouldn't have those feelings if they didn't dwell within your heart to begin with. The Yule season just brings them to the forefront, allows us all to luxuriate in them, unembarrassed and joyfully, before having to return to dealing with all the other (some not-so-pleasant) aspects of being human.

Wasn't it a good Carols from Kings? I missed the radio one and watched it on the telly instead, where it's aftena bit tampered with, but I thought it was one of the best ever.

And there's still a glass left in the bottle, Tom's dismembered the turkey and Mol's had a brush (some Christmas present! she says), and I'm more than happy to drink to everything you have said so well. Long may Now always be the time! Love and best wishes to you both, and a very happy Christmas.

Joining this toast with afternoon coffee while baking biscotti.

I've been reading your lovely posts for a few years now, but don't think I've ever commented. Of course, I found you through Clare's blog. I wish you and those who surround you a lovely 2010.

Rebecca (Portland OR US)